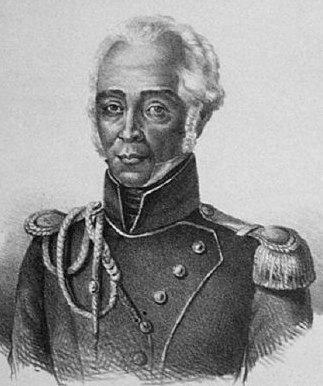 Pioneering cartographer and meteorologist Jean-Baptist Lislet-Geoffroy was born August 23, 1755 in Saint-Pierre, Réunion, a French island colony in the Indian Ocean east of Madagascar and southern Africa. He was the son of Jean-Baptiste Geoffroy, a white French engineer, and an African princess and ex-slave from Guinea named Niama. As a teenager, he was unusually gifted in mathematics. He studied to become an engineer under the tutelage of Vice Admiral Bernard de Tromelin, who was in charge of the drainage and development of Port Louis on the island of Mauritius, 140 miles northeast of Réunion. Lislet-Geoffroy remained on Mauritius, working first as a ship’s pilot and later as an engineer.

In 1772, accompanying the French naturalist Philibert Commerson on an excursion to an erupting volcano at Piton Bert, Réunion, Lislet-Geoffroy, serving as a guide and herbalist, painted a watercolor of the scene that later found its way to Paris in the form of a book illustration that featured a miniature of him in the uniform of an engineer. In 1880, he was officially appointed Draftsman of Engineering and also took on the responsibility of recording daily meteorological data that was published annually until 1834, thus establishing him as the first meteorologist of the Indian Ocean. Lislet-Geoffroy’s work in Mauritius and Réunion did not escape the notice of scientists in the region and beyond, as Abraham Masson, editor of De l’almanach Il de France (Almanac of Mauritius), entrusted to Lislet-Geoffroy publication in the almanac of his astronomical tables used to calculate longitudes and latitudes.

In 1786, at age 31, Lislet-Geoffroy was elected a corresponding member of the Académie des Sciences de Paris (Academy of Science of Paris), the first person of African descent to receive the prestigious honor. The following year he sailed to Madagascar to map the Bay of Sainte Luce, Madagascar, north of Fort Dauphin, and wrote an account sent to Paris and partially published in Annales des voyages (Annals of the Voyages) of Malta-Brun. He labored to produce more precise maps of his region (i.e., Réunion, Madagascar, Mauritius, and Seychelles) which were invaluable to military and merchant vessels sailing in the Indian Ocean.

More than a celebrated man of science, to those opposed to slavery in the empire, like his admirer Henri Grégoire, Lislet-Geoffroy was viewed as symbol of their cause—liberty, brotherhood, and the equality of man—as the French Revolution approached. However, during the turbulent years of the Revolution, Lislet-Geoffroy was President of Madagascar’s small, ineffectual assembly of free men of color which failed to take a stand against slavery. An owner of slaves himself—a number of whom he had freed—his attitude toward them was paternalistic.

In 1803, Lislet-Geoffroy was promoted to Captain of Engineering. In 1810, when the British took control of Madagascar, Lislet-Geoffroy was commissioned to inventory military structures on the island. The new British regime employed him as a hydrographic engineer and later gave him a position that amounted to a sinecure. He retired to the island of Mauritius where he had founded several learned societies, never having set foot in France or England. He died in his home on February 8, 1836, survived by two children.