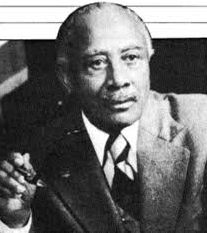 Civil rights supporter, city official, and social activist Gilbert William Lindsay was born on a cotton plantation in Mississippi on November 29, 1900.  As a teenager, he left the state and enrolled in a school in Pittsburgh, Pennsylvania. Lindsay later moved to Arizona where he served in the 10th Calvary and 25th Infantry of the United States Army.

Lindsay left the military in 1923 and migrated to Los Angeles, California. He worked as a janitor in the city’s Department of Water and Power (DWP). Along with his job, he attended classes in governmental administration and political science at the University of Southern California. After passing a civil service exam, he became a clerk in the DWP. While at DWP, he got involved in grassroots Democratic politics and helped turn out the black vote on bond issues in the 1930s.

For the next three decades Lindsay continued to work for the DWP while maintaining his involvement in local politics. In 1952, he managed the election of Kenneth Hahn to the Los Angeles County Board of Supervisors. Hahn then appointed him a field deputy, his first job outside of DWP.

In late 1962, Edward Roybal, who represented the Ninth district of the city council and the first Latino councilman since 1888, was elected to the United States Congress and vacated his post, leaving it open for an interim appointment. The district covered downtown, Boyle Heights, Little Tokyo, Chinatown, and part of predominantly black South Central. Three months before the council elections in April of 1963, the council appointed Lindsay, making him the city’s first African American officeholder in the city since the Spanish period.

Civil rights was another part of Lindsay’s career. From 1953 to 1958, he served on the national board of directors of the National Association for the Advancement of Colored People. Even after becoming a member of the Council, Lindsay continued his civil rights activities. He joined the local United Civil Rights Committee and participated in a June 1963 protest against school segregation.

Lindsay won election in the Ninth district in 1965 and continued to serve until 1990. He headed the Public Works Committee, served as vice-chairman of the Arts, Health, and Humanities Committee, and was a member of the Community and Economic Development Committee. He was most noted for expanding the amount of housing available to senior citizens. Among the projects were Stovall Foundation, Philips Temple Community Housing, and Angelus Plaza complex, the largest subsidized senior citizen housing in the nation. He also arranged for $14 million in low-interest loans to South Central homeowners for rebuilding projects after the Watts Riot and he established several child care centers.

Lindsay belonged to several prominent civic organizations. Among them were the American Legion, Town Hall, and the Los Angeles Urban League.

Gilbert W. Lindsay died at Queen of Angels/ Hollywood Presbyterian Medical Center after a long illness on December 28, 1990 at the age of 90.  He was survived by a daughter and a stepson. In March of 1995, a 10-foot-high artwork covered with photo images of him was unveiled on a plaza in front of the Los Angeles Convention Center.