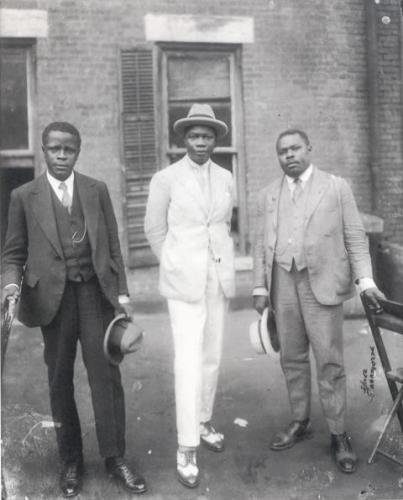 The Ligue Universelle pour la Défense de la Race Noire (LUDRN) was a Pan-African association created on April 30, 1924, by Kojo Tovalou Houénou, known as Tovalou, descendant of the last king of Dahomey (now Benin). The headquarters of the association was located in Paris and the executive committee was composed of seven black members from the French Empire. Tovalou, a military doctor during the First World War, was designated president of the association, and René Maran, a colonial administrator for Martinique, was vice president. The objectives of the association were the defense and protection of the rights of black people all over the world, the development of solidarity among the black population, and the evolution of the race through education.

At its beginning, the association was financed by members’ contributions and cultural events. Meetings and seminars on the black race or concerts were organized in famous public places to promote the association and arouse the interest of the population in black issues. A newspaper called Les Continents was created on May 15, 1924, endorsing ideals of the association, providing information about the situation of blacks in the French colonies but also about worldwide black issues.

Soon after the founding of the association, its leaders planned a visit to the United States in order to promote its objectives and to study the racial situation in that nation. Tovalou arrived in the U.S. in August 1924, and pursued a series of conferences in cities with large African American populations. Tovalou also spoke at the Universal Negro Improvement Association (UNIA) convention in New York in 1924 and outlined LUDRN objectives: Paris was envisioned as the center of the Pan-African movement and charged to present black world claims to the League of Nations. This visit to the U.S. enabled Tovalou to benefit from the sympathy of National Association for the Advancement of Colored People (NAACP) and leaders such as W.E.B. DuBois.  In contrast, Marcus Garvey and UNIA leaders were not willing to give their endorsement.

Upon his return to France, Tovalou was forced to leave for Dahomey by French authorities because his connections with African American leaders were considered dangerous. In addition, an anonymous critique of Senegalese deputy Blaise Diagne, concerning recruitment of black soldiers for the French Army was published in Les Continents and led to a suit against Maran, who had taken control of the LUDRN. The LUDRN lost the case, and the newspaper stopped its activity in December 1924. Weakened by Tovalou’s absence, the LUDRN did not survive the incident.

Although it was a short-lived, the LUDRN inspired numerous Pan-African associations and newspapers created in Paris before World War II.