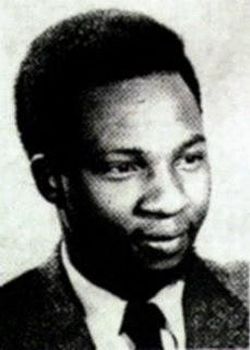 African author Camara Laye was born on January 1, 1928 in the city of Kouroussa, Guinea, then a colonial possession of France. Laye (which is actually his first name, but is used as a preceding name, to keep in tradition with regional customs) was born into a Malinke family, an ethnic group related to the Mandingo people who created the Mali Empire. Laye’s parents, Camara Komady and Daman Sadan, had twelve children.  His father was a blacksmith.

Early in his childhood, Laye briefly attended a Koranic school, before his father enrolled him in a French Colonial Government school. Laye excelled academically throughout his primary school years, and around the age of fourteen, he began his attendance at Ecole Georges Poiret School in Conakry, the capital of Guinea.  Upon the completion of his studies in 1947, Laye achieved 1st place in his school’s final examinations which automatically awarded him a scholarship to study in France.

Laye, who was now 19, attended the Central School of Automobile Engineering located in Argentueil, France. Since the scholarship he had been awarded expired after one year, Laye was forced to work as a porter in the public transport system and a skilled auto worker for a car assembly plant. During his stay in France, Laye came into contact with other African students and scholars, exposing him to such ideas as the Pan-Negro and Negritude which later influenced his writings.  In 1953 Laye married his first wife, Marie Lorifo, whom he had met in Conakry before leaving for France.

In 1948 Laye began writing while still working in the automobile factory.  Partly due to loneliness and nostalgia, Laye completed an autobiography of his early childhood in Guinea, titled The African Child or The Dark Child (1954) which was his first published work. Reviews were positive for the aspiring writer, and the work won him the Prix Charles Veillon Award in 1954.

In 1956, Laye and his wife returned to Guinea, two years before it had declared its independence from France. Soon afterwards Marie gave birth to their first child. From 1957 to 1958, Laye taught  in a French administered school in Accra, Ghana, and by end of 1958, had become newly independent Guinea’s first appointed ambassador to Ghana. They had a second child in 1958.

As the political and social situation in Guinea worsened in subsequent years under the rule of President Sekou Toure, Laye and his family left the country for Dakar, Senegal in 1965. While in Senegal Laye became a Research Fellow at the Institut Fondamental d’Afrique Noire (IFAN) which was part of the University of Dakar (now known as Cheikh Anta Diop University).  He studied folk tales and oral histories. Laye continued his passion for research and writing and his interest in politics until his death. Camara Laye died on February 4, 1980 in Dakar at the age of 52, due to a kidney infection.