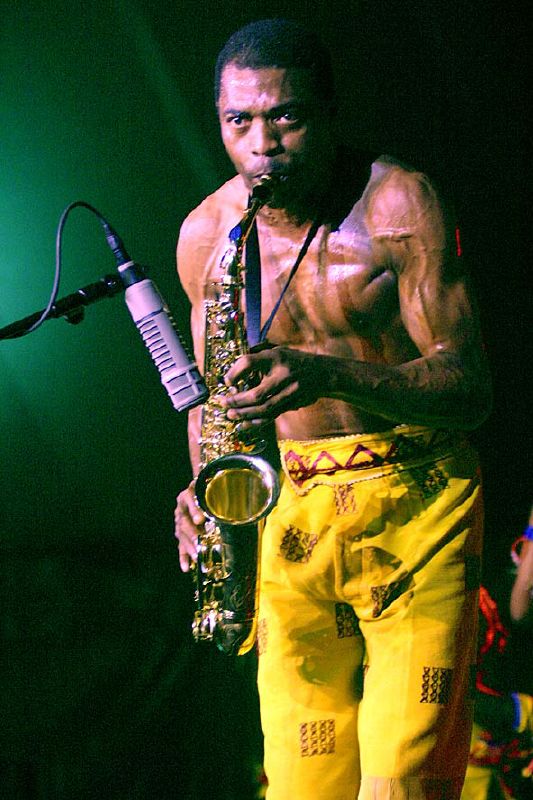 Fela Kuti was born in Abeokuta, Nigeria in the year 1938 as Olufela Olusegun Oludotun Ransome-KutFela Anikuplap Kuti. He later shortened his name to Fela Kuti, as he saw his birth name as a symbol of slavery and oppression. He also was popularly known as Fela Ransome-Kuti, the stage name he used for a number of years. Kuti was considered both a political firebrand and one of the most influential musicians of the 20th Century.

Fela was born into a middle class family of Nigerian political activists. His mother, Funmilayo Ransome-Kuti, was a leader in the anti-colonial campaign against the British. His father, Rev. Israel Oludotun Ransome-Kuti, was the Protestant minister and school principal who became President of the Nigerian Union of Teachers.

Kuti was sent to London in 1958 to study medicine but instead enrolled in Trinity College of Music. He formed his first band while in London and then returned to Lagos, Nigeria in 1963. He first visited the United States in 1969. During this and subsequent trips he was influenced by the Black Power Movement and the Black Panther Party.

Singer, songwriter, composer, and fluent in trumpet, keyboard, and sax, Kuti combined the native music of Nigeria and American Jazz, creating intricate music that would later be called Afro-Jazz. Known for refusing to play a song once it was recorded, Kuti did not have a strong fan base in the United States, but he was able to secure fans in Nigeria, other African nations and in Europe.

In 1971 Kuti created the Kalakuta Republic in Lagos. The “Republic” was a commune, recording studio, and home to dozens of musicians and political dissenters. He later declared it independent of the Nigerian state as a protest against the military government. He also opened a nightclub he called the Shrine in Lagos which featured his band Africa 70 and elaborate stage shows.

Government concern about Fela increased with his popularity. At first he was the target of the local police because he and his musicians promoted marijuana usage. In 1977, however, Fela recorded the album Zombie which was an attack on the Nigerian military and in particular its role in Biafra during the Nigerian Civil War. Eventually one thousand police were ordered to shut down the Kalakuta Republic. Fela and other band members were severely beaten in the raid, their instruments and music destroyed, and the commune building was burned down.

The 1977 attack did not end his critique of the Nigerian government. In 1979 he founded a new political party, which he called MOP, Movement of the People. Kuti attempted to run for office in Nigeria, but was banned from political activity by the government.  Throughout the 1980s Fela continued to attack the Nigerian government but he also critiqued world leaders such as U.S. President Ronald Reagan, United Kingdom Prime Minister Margaret Thatcher, and South African Prime Minister P.W. Botha. By this point he openly used his music as a political tool, with almost all of his records influenced by political events in Nigeria and across Africa.

Kuti eventually stopped performing in the 1990s partly because a new Nigerian military dictatorship increased its repressive measures toward him. Kuti’s health was also failing. On August 2, 1997, Fela Kuti died in Lagos from complications from AIDS.