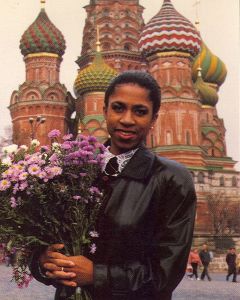 Yelena Khanga is a journalist and writer who was born in 1962 in Moscow, Russia. She is the daughter of Abdulla Khanga, who was the onetime vice president of Zanzibar, and Lily Golden, a Russian woman who was a historian and educator. She was also the granddaughter of a black Christian, Oliver Golden and a Polish Jew, Bertha Bialek. The pair met in jail after being arrested during a union demonstration and migrated to the Soviet Union in 1931 after being disowned by Bialek’s family for being in an interracial relationship.

Khanga grew up in Moscow, attending schools where she was often the only child of African ancestry. She said that she “was never made to feel less intelligent, less capable, less likely to achieve than my white schoolmates.” However, Khanga said that she did realize that she was different and she felt like an outsider. As a teen Khanga started playing tennis and was able to travel the Soviet Union as a member of the Army Tennis Team. After finishing public school, she attended Moscow State University and graduated in 1984 with a degree in journalism.

After graduation Khanga became the first black TV correspondent in Moscow for Moscow World News and at one point, she interviewed the leaders of the Soviet Union. In 1987 she participated in a journalist exchange program where she wrote for an American newspaper, the Christian Science Monitor in Boston. She was the first female journalist to be selected by the Soviet government to be included in this type of journalist exchange. Consequently she traveled between the Soviet Union and the United States and then officially emigrated to the U.S. after the exchange program was complete and as the Soviet Union collapsed and the Russian Federation was formed in 1991.

Although raised in Russia, Khanga traced her roots to Poland, Tanzania, Mississippi, and several large American cities. Her attempt to track her family background led her to a number of discoveries about racism in Russia and the United States.  Those discoveries became the basis for her writings. In 1990, Khanga began writing Soul to Soul: The Story of a Black Russian American Family: 1865-1992 with Susan Jacoby which was published in 1992. She also wrote a number of articles for the Chicago Tribune. All of her writings describe her experiences in her native land and abroad.

Khanga became a minor celebrity in the United States after she was profiled on the television news show, 20-20 in 1991.  That exposure led to articles in a number of major newspapers.  After the 20-20 interview, a cousin of Yelena’s late grandfather recognized his picture while watching the show and as a consequence she began to establish connections with her African American family members. Khanga began to research her geographically and racially diverse family tree with a grant that she received from the Rockefeller Foundation in 1991. Later that year, partly because of her research, the various branches of her family gathered at a family reunion in New York in her honor.

Currently Yelena Khanga lives in New York and divides her time between the United States and Russia. She is working on an autobiography and social history of her uniquely diverse family background and ancestry.