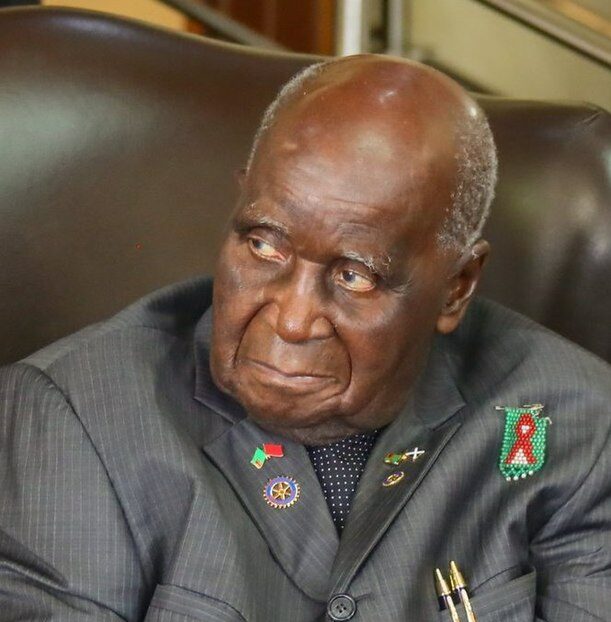 Kenneth Kaunda, who served as Zambia‘s first president from October 24, 1966, to November 2, 1991, was born on April 28, 1924, in Lubwa, Northern Rhodesia (Zambia’s name as a colony of Great Britain).  Born as the eighth child to David and Helen Kaunda, they gave him the name Buchizya, meaning “the unexpected one.”  As a child, Kaunda became very fond of football and passionate about music.

In August 1940, Kaunda was chosen to attend Munali, a secondary school in Northern Rhodesia, to become a teacher.  He returned to Lubwa in 1943 as an instructor in the local schools. In 1949, however, he became a farmer.  Kaunda soon became involved in an emerging nationalist movement, which was called Congress. He formed a branch of the Congress in the Chinsali district, his home region.

In October 1958, Kaunda was among a small group of political activists who had left the National Council of Congress to form the Zambia African National Congress (ZANC).  Kaunda was unanimously elected as the president, and it was at this meeting that the name of the country was born.  British authorities quickly banned ZANC and Kaunda was arrested on March 12, 1959.  He was released on January 9, 1960, and on January 31 was elected the president of a new political organization, the United National Independence Party (UNIP).  Unlike ZANC, the UNIP pledged to lead a non-violent struggle for self-government.

In the general election in October of 1962, the United Federal Party (UFP), a coalition of African and white settler politicians who favored continued colonial rule, won the colony’s first election over the UNIP.  But, in January 1964, UNIP won a second election, claiming 55 out of 65 seats.  With the UNIP controlling the national assembly, it was only a matter of time before British colonial rule would end in Northern Rhodesia.  On October 24, Kenneth Kaunda, the leader of the UNIP, officially became the first President of the independent state of Zambia.

Kaunda declared his continued belief that Zambia could establish a democracy where both Africans and white settlers could live in peace.  As such Zambia managed to avoid the racially divisive power struggles that plagued its neighbors, Southern Rhodesia (now Zimbabwe) and South Africa.

By the 1980s Kenneth Kaunda, now the author of several books on African political development, had emerged as one of the most respected political leaders in Africa.  He served as Chairman of the Organization of African Unity from 1970 to 1973.  He has also brokered efforts to resolve disputes within and between African nations and was particularly active in the long campaign that led to Zimbabwean independence in 1980.   Kaunda has been awarded Honorary Doctorates of Law from European, Latin American, and U.S. universities.

In 1991 Kenneth Kaunda stepped down as President and retired from political life.  His voluntary withdrawal from politics stood in sharp contrast to numerous African leaders who died in office or who were forced from power.  Kaunda married Betty Banda in 1946.  The couple has had ten children. The Kaundas live in Lusaka, the capital of Zambia.