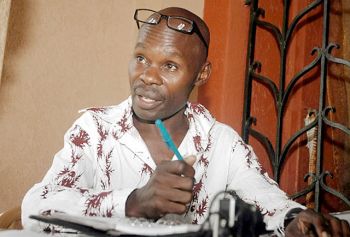 David Kato was founding father of Uganda’s emergent gay rights movement, the first openly gay man in the country, and an international gay rights activist. He was brutally murdered in January 2011.

Born around 1964, Kato joined his twin brother John Wassawa Mulamba and family in their ancestral village of Nakawala. He reported being raised in a religiously conservative home where homosexuality was not accepted. Kato attended King’s College Budo and Kyambogo University in Uganda and then taught at the Nile Vocational Institute in Njeru. The school dismissed him in 1991 without benefits because of his sexual orientation. He relocated to Johannesburg, South Africa in the mid-1990s to continue teaching and witnessed that nation’s transformation from apartheid to a multicultural democracy. He first went public as a gay man while there.

Kato returned to Uganda in 1998 and soon afterwards held Uganda’s first gay rights news conference in the nation’s capital, Kampala. By doing so, he became the first person in his home country to openly admit his homosexuality. In apparent retaliation, police officers arrested and beat him and detained him for a week. This would be the first of his three arrests for being gay.

Kato started teaching again in 2002 when he joined the faculty at St. Herman Nkoni Primary School in the Masaka district of Kampala. In 2004, Kato co-founded the gay rights group, Sexual Minorities Uganda (SMUG), in Kampala and then worked for the organization as a litigation/advocacy officer.

In October 2010, a Ugandan newspaper, Rolling Stone (no association to the U.S. magazine), published a piece entitled “Hang Them,” listing photos and addresses for the most prominent 100 gay men and lesbians in Uganda, including Kato. In response, he and two other activists sued the paper. In January 2011, Uganda’s High Court ordered the newspaper to pay damages to the three litigants and to stop printing information about LGBTI (Lesbian Gay Bisexual Transgendered Intersexual) persons.

On January 26, 2011, Kato was brutally murdered in his home near Kampala. His assailant beat him to death with a hammer. The professed murderer, Sidney Nsubunga Enoch, received a 30-year prison sentence. Enoch’s confessed motive was Kato’s propositioning him. Many Ugandan activists question his story and allege that Kato’s murder was retaliation for the Rolling Stone law suit and his other activism.

Kato’s death also has been linked to conservative Christian groups from the United States who held anti-gay rallies and workshops in Uganda in 2009. Ugandan politicians and ministers responsible for writing a stringent anti-gay bill participated in the meetings, even discussing the legislation with the Americans.

Kato’s martyrdom brought much criticism from the international community.  The Ugandan government was urged to squelch this legislation which had called for the death penalty for certain homosexual acts. The law was set aside in May 2011 but a similar anti-gay measure was introduced in 2012.