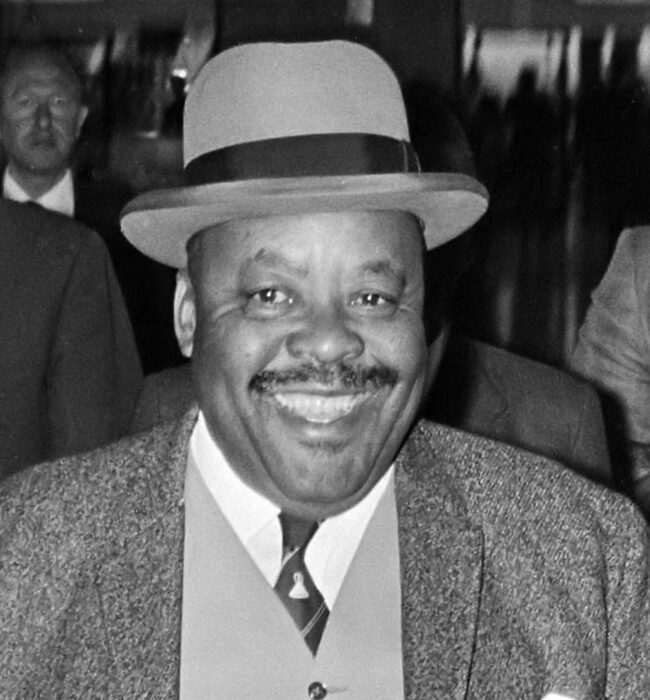 Joseph Leabua Jonathan was the first Prime Minister of independent Lesotho. He was born on October 30, 1914, in Leribe, Basutoland now Lesotho), one of the many great-grandchildren of the polygamous King Moshoeshoe I, the founder of the Basuto nation. His parents were Jonathan Ramanemane Molapo and ‘Makatiso Molapo. Jonathan’s father was a minor chief but his family was from a working-class background. At the time Basutoland was a British protectorate.

As a child, Jonathan attended the Paris Evangelical Missionary School in Morija. In 1934, he traveled to the Witwatersrand region of South Africa and like many from Basutoland, toiled in the diamond mines for three years. During that time, he experienced the humiliation and discrimination afforded Blacks in South Africa. This experience led him to involvement in local politics when he returned to Basutoland in 1937.

Over the 1940s and 1950s, Jonathan accompanied several delegations that journeyed to London requesting self-government for the protectorate. In 1959, he founded the Basutoland National Party (BNP), and the following year the party participated in the first elections in the colony, coming in fourth in the election. Basutoland, however, remained a British protectorate and this election was seen as only one step toward eventual independence.

Basutoland was scheduled for independence in 1966.  In the pre-independence elections of April 1965, the BNP won 31 of the 60 parliamentary seats. Chief Jonathan, as he was popularly known, was appointed Prime Minister on July 7, 1965. The following year Basutoland became an independent nation and was renamed the Kingdom of Lesotho on October 4, 1966.  King Moshoeshoe II was the titular head of government but Chief Jonathan was Prime Minister and as such was head of state.

The first post-independence elections were held in January 1970. When it seemed that the opposition party might win, Prime Minister Jonathan, citing election irregularities, nullified the election, and declared a state of emergency in the country. The constitution was suspended and parliament dissolved.

In 1973 an interim assembly was appointed by the Jonathan government. This body acted as a rubber stamp for the Prime Minister’s policies, alienating many of his former supporters. Jonathan also allowed the African National Congress (ANC) which was fighting to end apartheid in South Africa, to establish a presence in Lesotho. South Africa, which encircles Lesotho, reacted by closing their common borders and threatening more direct actions against the Jonathan government. In 1985, South Africa claimed that Lesotho had become a major base for African National Congress guerrillas and imposed a blockade that drastically reduced the flow of goods in and out of the country.

Growing internal dissent coupled with the South African blockade led the Lesotho military to stage a coup on January 20, 1986. The coup led by Major General Justin Metsing Lekhanya deposed Prime Minister Jonathan and his government. The blockade was lifted after the coup leading Jonathan to accuse Pretoria of masterminding his overthrow.

Leabua Jonathan was placed under house arrest but eventually was allowed to seek medical treatment in South Africa. He died in Pretoria, South Africa on April 5, 1987, at the age of 72.