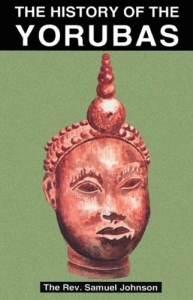 Born to Henry and Sarah Johnson, in Hasting, Freetown, Sierra Leone in 1846, Samuel Johnson’s father was originally from the nation of Oyo in what is now southwestern Nigeria.  Henry Johnson claimed to be a descendent of Abiodun, the last great king of Oyo.  Captured by slavers, he was later liberated by the British Royal Navy and brought to Freetown, Sierra Leone. There he joined other “recaptives” who had grown large enough in number to dominate the politics and culture of the British Colony by the 1850s.

In 1857 Henry and Sarah Johnson moved with their four sons to the Church Missionary Society (CMS) Mission in Ibadan in what is now southeastern Nigeria.  The Society believed that by training recaptives in Christianity and Western values and then dispatching them across West Africa as ministers and teachers, it would undermine the ongoing slave trade and check the spread of Islam in the region.

Samuel Johnson’s education began under the guidance of CMS missionary David Hinderer in Ibadan and was completed with Gottlieb Buhler at the CMS Training Institution in Abeokuta.  There Samuel Johnson was educated in Scripture and Catechism, Greek, Modern and Medieval History, Mathematics, Philosophy, and Natural History.

Johnson’s education and life direction were also influenced by his older brothers, Henry Jr. and Nathaniel, who became ordained Anglican priests.  Henry eventually became an archdeacon working throughout Yorubaland while Nathaniel became the pastor of an Anglican church in Lagos, Nigeria.

In 1866, twenty year old Johnson was given his first missionary assignment; he became the schoolmaster at a CMS mission school in Ibadan.  By 1870 Johnson was appointed superintendent of the Anglican Mission schools in Ibadan.  Three years later in 1873 he visited Oyo, his ancestral homeland. By now Johnson was married and had two daughters.

In 1881 Samuel Johnson was sent to Oyo to continue missionary work.  Seven years later in 1888, he became the priest for the area’s Anglican Church.  While in Oyo, Rev. Johnson began a nearly two decade effort to gather information for what would eventually be the first history of the Yoruba people.  In 1897, by the time all of Yorubaland had come under British colonial rule, Johnson completed his manuscript and sent it to the Church Missionary Societies headquarters in London, where it was lost. Rev. Samuel Johnson died on April 29, 1901 in Lagos without seeing his life’s work published.

Samuel Johnson’s youngest brother, Dr. Obadiah Johnson (the second Nigerian to qualify as a medical doctor), vowed to complete the history.  Using notes left by Samuel Johnson, he painstakingly reconstructed the manuscript.  Obadiah Johnson died in London in 1920.  However the book that both Johnsons had laboriously constructed over nearly four decades was finally published in London by George Routledge and Sons in 1921 as The History of the Yorubas: From the Earliest Times to the Beginning of the British Protectorate.