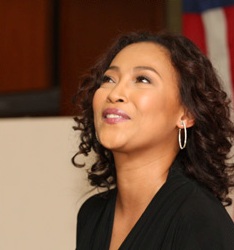 Jaya, born Maria Luisa Ramsey, is one of the most renowned singers in the Philippines. Born to popular Afro-Filipino comedienne Elizabeth Ramsey and Filipino singer and musician Reynaldo Kagahastian on March 21, 1970 in Manila, Jaya’s parents separated when she was three years old. Her father emigrated to Canada.

Jaya’s first entree into show business in the Philippines was as a pre-teen backup dancer. Once an aspiring nurse, Jaya dropped out of high school at the of age 15 and followed her mother to the United States. She enrolled at John Marshall High School in Los Angeles, California. However, in 1988, she ran away from home and landed a role in New York City, New York as a back-up singer for freestyle-disco vocalist Stevie B.

Jaya’s talent was discovered by music producers. In 1989, she signed a record deal in which a producer renamed her Jaya. In 1990, she moved to Florida for four years and then rejoined her mother in California. There, she entertained for the Filipino-American community and, in 1995, she accepted the advice of illustrious Filipina recording artist Pilita Corrales to relaunch her career in Manila. A year later, Jaya released her first album in the Philippines, Jaya, with Viva Records. She received considerable notice when she placed first in the Metropop Song Festival and the Song Festival-Hong Kong, China in 1997.

Between 1996 and 2011, Jaya became a success. She released ten albums, three of which went platinum: Jaya(1996), In the Rain (1997), and Five: Greatest Hits (2000). Two albums went gold such as the Christmas album Kung Kailan Pasko (1998) and Honesty (1999). Three of her most beloved hit songs include “In My Dreams,” OPM (Original Pilipino Music) favorite “Sana Maulit Muli,” and “If You Leave Me Now,” which in 1989 made her the first Filipino singer to make the Billboard dance chart. Though mainly associated with OPM love songs, her voice and intonation reflected the styles of American R&B singers. By the turn of the century, Jaya was hailed as the “Soul Queen of the Philippines.”

In addition to her music, Jaya gained experience in acting. She made her acting debut in the GMA Network soap opera Diva, the drama series Mga Basang Sisiw (“The Wet Chicks”), and the sitcom Kaya ng Powers (“Can the Powers”).  In recent years, she has appeared as a talent judge on GMA’s Sunday All Stars and ABS-CBN’s It’s Show Time.

In 1998, Jaya married American drummer Andrew Buffington. However, their marriage dissolved three years later. In 2005, she married Gary Gotidoc, a divorced Filipino-American rap artist. The coupled had a daughter, Sabriya, in 2006 and a son, Dylan, in 2009. In 2014, she suffered a miscarriage after gallbladder surgery.

Over the past decade, religion has been a major influence in her life.