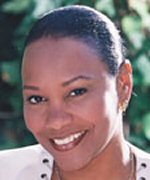 Yvette M. Jarvis has the distinction of being the first African American woman elected to serve on the Athens, Greece City Council from 2002 to 2006.   Born in Brooklyn, New York, in 1957, Jarvis traveled to Greece in 1982 after graduating from Boston University (Massachusetts).  An accomplished basketball player, Jarvis was recruited into the Panathinaikos, becoming the first salaried female athlete in the Greek Women’s Basketball League. Jarvis quickly became well-known in Greece and used her celebrity status to spearhead social and political causes within her adoptive homeland, becoming an advocate for minority rights. Jarvis chose to participate in Greek NGOs that emphasized the rights of immigrants, women, and people with special needs.

After playing basketball for the Greek Women’s Basketball League, Jarvis became a model, a TV personality, and a professional singer. Jarvis became a celebrity presence in Greece, widely known throughout the country simply as “Yvette.”

During the 2004 Olympic torch relay around the world, Jarvis was chosen to represent Athens, Greece and traveled with the torch.  Jarvis continues to serve Athens and the people of Greece as the Special Advisor to the Mayor on Immigration.