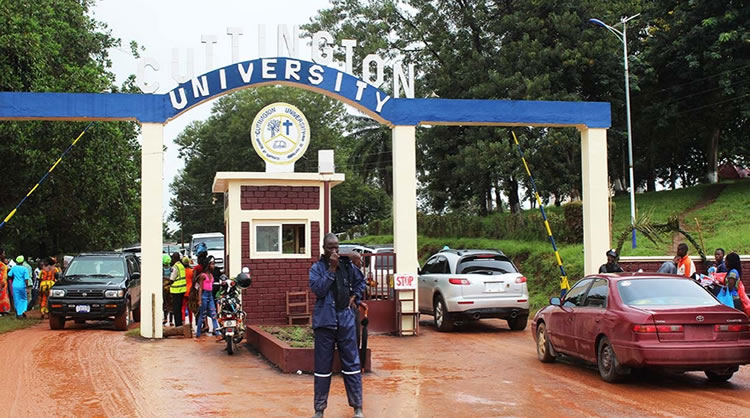 Cuttington University in Liberia is the oldest private, coeducational, four-year degree granting institution and the oldest college or university in sub-Saharan Africa. Cuttington’s origins date back to 1887. In that year the Cape Palmas Missionary District of Liberia (of the Protestant Episcopal Church in the United States of America) founded the Hoffman Institute for the training of ‘men in skill and virtue’ and located it in Harper, Liberia. A divinity school was added and the institute’s name was changed to Cuttington Collegiate and Divinity School on February 22, 1889.

The college was named after Robert Fulton Cutting who in 1885 donated $5,000 to purchase land on which to build the institution. The College awarded its first two certificates of proficiency in 1909 and was incorporated to give diplomas and grant degrees in 1922. In 1929 the College was forced to close due to lack of financing. Up to that point it played an important role in providing classical education along with agricultural, industrial, theological and preparatory training to many Liberians and other Africans.

In 1949 the college reopened at a new site in Suakoko, Bong County, Liberia. The Liberian government donated 1,500 acres for the site of the new school which was built under the auspices of the American and Liberian Episcopal dioceses. With its opening Cuttington University College and Divinity became the first and only four-year, degree granting, co-educational, private liberal arts college South of the Sahara Desert.

By 1980 Cuttington had six degree granting Colleges: Education, Humanities, Social Science, Natural Science, and Nursing & Theology. In May 1990 the college was closed again, this time due to the Liberian civil war. The campus was looted and structures were damaged by the militias engaged in the fighting. The institution remained closed until 1996. However, a “Cuttington-in-Exile” program was established in Monrovia, Liberia during a large part of the civil war.

In 2005, several years after the civil war ended, Cuttington reopened. The Liberian government approved a new designation for the school: Cuttington University. Academic programs were expanded and new programs adopted by Cuttington University. This included the creation of a school of Graduate and Professional Studies in Monrovia. A junior college branch of the university was established in Kakata. Service Learning became a required course for all students. An Institute for Peace and Conflict Resolution was created.

Cuttington University now serves is a private, co-educational institution of higher learning with a student body of approximately 1,500 students from throughout Africa. The university’s motto is Sanete et Sapiente, “With Holiness and Wisdom.”

Prominent alumni include: George Browne (1933-1993), Episcopal Bishop of West Africa; Gyude Bryant (1949-2014), Chairman of the Transitional Government of Liberia; Wilton A. Sankawulo (1937-2009) Chairman of the Council of State; Sie-A-Nyene Yuoh, a woman Associate Justice of the Liberian Supreme Court.