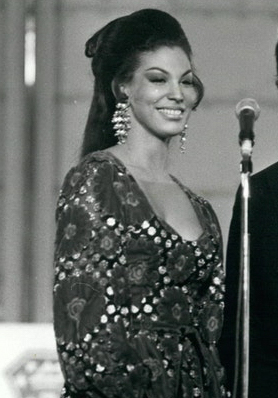 When Jennifer Josephine Hosten won the Miss World contest in 1970 she was the first woman from Grenada and the first of woman of African ancestry to hold the crown.  She was crowned amid the greatest controversy in Miss World Pageant history.

Hosten was born on October 31, 1947 in St. George’s, Grenada. At 22 years old, she entered the Miss World contest which was held that year in London, UK.  From the outset the 1970 pageant was roiled in controversy.  Pageant officials allowed two women to represent South Africa, one white, the other black during the time when that nation was still under the apartheid system. There were also protests by women’s liberation groups who felt all beauty pageants demeaned and objectified women.  Comedian Bob Hope, the major entertainer for the evening pageant, was also heckled.

The unrest continued when Ms. Hosten and the black contestant from South Africa were announced as Miss World and first runner up, respectively. Numerous protesters charged that the results displayed racism against the unsuccessful white contestants.  It was later revealed that four of the nine judges had awarded Miss Sweden their first place votes while Ms. Grenada (Jennifer Hosten) received only two first place votes. Despite the vote, Miss Sweden finished as fourth runner up. Adding to the controversy was the presence of Sir Eric Gairy, the then prime minister of Grenada, as one of the judges.

In days immediately following the crowning of Ms. Hosten, Julia Morley, the pageant director, resigned due to intense pressure and coverage from the British news media. The pageant board of directors then made public the complex voting procedure that allowed a contestant to win with a minority of first place votes and reiterated that Ms. Grenada was the rightful victor.  Their explanation, nonetheless, did little to dispel critics who still believed that widespread corruption had taken place.  Over two decades later Miss Sweden, Marjorie Christel Johansson, continued to make the claim that she had been cheated out of the title.

After her reign, Hosten worked in customer relations for Air Canada and married David Craig, one of the airline executives.  The couple, who had two children, Sophia and Beau, lived in Bermuda and then moved to Ontario, Canada in 1973. Hosten earned a Master’s degree in political science and international relations from Carleton University in Ottawa and between 1978 and 1981 served as Grenada’s high commissioner to Canada.  Holding Canadian and Grenadian dual citizenship she then worked as a Canadian diplomat in Dhaka, Bangladesh before returning to her native Grenada.

In 1992 Hosten published The Effect of a North American Free Trade Agreement on the Commonwealth Caribbean.  In 2006 Hosten, who was now married to her second husband, Shaun Sarsfield, a Grenada businessman, was appointed the National Director of the Miss Grenada World Contest.