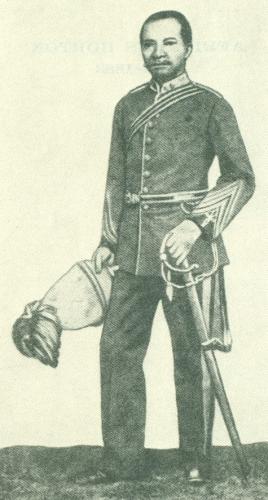 James Horton, African surgeon, soldier and nationalist, challenged prevailing views on the inferiority of Africans and proposed ideologies for African self-government. His philosophies became the basis for future African independence.

Horton was born in British colonial Sierra Leone outside of Freetown, the son of former Igbo slaves who were Recaptives. Horton lived in the village of Gloucester until 1847 when he moved to Freetown to attend the local Church Missionary Society School (CMS). In 1853 he was transferred to Freetown’s Fourah Bay Institution to train for a ministry in the Church of England. His seminary studies were cut short two years later when he was selected by the CMS to study medicine in preparation for a medical officer position in the British army. Horton attended Kings College in London for three years and then Edinburgh University for a fourth year to earn an MD.

In 1859 Horton was commissioned back to West Africa as staff-assistant surgeon in the British army. During his career as a medical officer, Horton would be moved to various posts throughout West Africa where he served in two Ashanti wars (1863 and 1873). His experiences led him to correlate topography and human health, developing theories that eventually would earn him a reputation in the medical world and a promotion to the army rank of surgeon-major.

During his military service in West Africa, Horton became more concerned with politics. In his book West African Countries and Peoples (1868), Horton challenged the prevalent notions of the racial inferiority of Africans and also put forward several proposals for the self governance of different African national and ethnic groups. However, Horton also saw himself as a loyal subject of the British crown and envisioned Britain as having a strong cultural and technological influence in the development of Africa. Thus his philosophies, radical at the time when colonial powers were dominant, have acted as a basis for future development of African independence and nationalist ideologies.

At the age of 45, Horton retired and returned to Freetown where he continued to promote African education as key to achieving self-governance, and he further provided scholarships to hopeful young Africans. He also took a keen interest in the technical and economic development of Africa, opening a bank to finance local entrepreneurs and putting forward proposals for gold mining and railway construction in Ghana. His business activities and gold mining investments made him one of the wealthiest men in Africa by 1880.