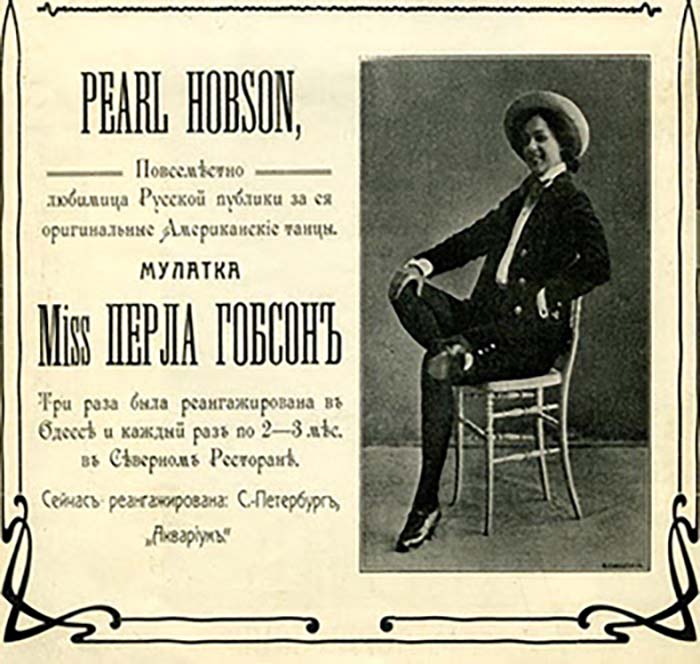 In the decades prior to the Russian Revolution, Pearl Hobson became the most popular African American dancer and singer in Imperial Russia.  Known by various names but mostly by her Russian stage name which translated into English was “Mulatto Sharpshooter,” Hobson captivated elite audiences from St. Petersburg to Moscow although apparently she lived much of this period in Odessa, Ukraine in Southern Russia.

Very little is known about Hobson’s background.  She was born on July 7, 1879 probably in Lisbon, Bedford County, Virginia, although some claim she was born in Roanoke, Virginia. Like a number of African American performers of that period, she left the United States partly to escape the racism in the country at that time, but she and many others, noticing the popularity of groups like the Fisk Jubilee Singers abroad, hoped to take advantage of the growing curiosity about African American culture through performance art.

It is not known precisely when Hobson left the United States but official records show the 25-year-old entertainer arrived in Copenhagen, Denmark by April 1904 as part of an African American dance troupe.  Later that year the troupe toured St. Petersburg, Russia.  Hobson and her fellow entertainers were not alone in the city. Between 1904 and 1916, acts such as the Creole Belles and the Darktown Entertainers had taken up residence in the city.  They were joined by the Black Troubadours in 1907, the Black Diamonds, in 1912 and Minnie Brown, who from 1915 to 1916 was saw herself as a rival to Hobson.

Hobson’s career however would be much more prominent partly because she was “discovered” by Mississippi-born African American entertainment impresario Frederick Bruce Thomas who arrived in Moscow in 1899 as a waiter but who by 1904 had become the owner of Yar, one of the most fashionable restaurants in the city.  Thomas who acquired Russian citizenship and changed his name to Fyodor Fyodorovich Tomas, took note of Hobson’s beauty and talent and featured her in his restaurant and eventually in his nightclub, the Aquarium, which he purchased in 1911. There Hobson became a local sensation.  One popular Russian writer, Don Aminado, declared after seeing her performance that “…the most beautiful legs in the world belong to Pearl Hobson, she is a mulatto and the star of the ‘Northern Hotel.’”

Hobson was also described in the Theater and Music section of the Russian newspaper, Moscow Leaf on December 3, 1907 after a performance at Yar: “Beautiful young Miss Pearl Hobson is the best decoration of the stage. Her success grows every day, and she is beloved by the public…”

Hobson continued to perform at Yar and then transferred to Thomas’s much larger Aquarium in 1911. Many of the black artists from that theater learned Russian and took Russian citizenship but Hobson was not among them.  On July 10, 1916 Pearl Hobson filed her last application for the extension of her American passport and left Russia. Her final destination was unknown and there is little documented information on her life after that date.