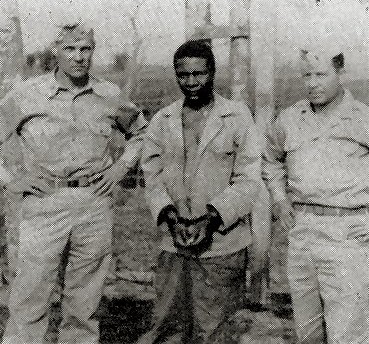 Herman Perry was the target of the “Greatest Manhunt of World War II.” In fact, there is no comparable search for a fugitive soldier in the annals of U.S. military history. Perry was born in poverty on May 16, 1922, in rural Monroe, North Carolina, the son of Flonnie Perry, an unwed teenager, and a man named Fraudus Allsbrook who immediately abandoned them. His life improved considerably when his family moved to Washington, D.C. where he found work as a butcher and had a girlfriend who made him the proud father of a daughter. His first brush with the law occurred in early 1941 when Perry was jailed for failing to show up for his draft board physical exam. He responded to the second notice.

With only an elementary school education during an era in which blacks in the military served in segregated units often led by bigoted, incompetent white officers, Perry served in the 849th Engineer Aviation Battalion comprised of 750 black men assigned to do manual labor and 50 white officers. In 1943, the battalion was shipped off to construct the 1,072-mile Ledo Road connecting northeastern India and northern Burma, a thoroughfare the Allies needed to keep supplies flowing to Chinese forces resisting Japanese occupation.

Under horrid conditions, heat, rain, mud, leeches, mosquitoes, malaria, lousy food, and harsh discipline, morale plummeted. Angry at having already spent more than his prescribed 90-day sentence in the stockade for disobeying a white officer, a punishment he protested, Perry subsequently missed reveille and on the humid afternoon of March 5, 1944, he walked off from his work camp carrying an M1 service rifle rather than the pickaxe or shovel of a typical battalion laborer. Confronted by a white lieutenant who stepped out of a passing jeep and aggressively approached him, Perry shot twice, killing him, then vanished into the jungle.

Thus began Perry’s story of wilderness survival, interaction with indigenous Burmese tribes, escapes, and captures. He sustained a life in the jungle by ingratiating himself with the Naga tribe and married the chief’s 14-year-old daughter. He was also helped by sympathetic blacks in his battalion who allowed him to sneak back to camp to pilfer food and other items from military stores which he shared with tribesmen. Several months passed as Perry continued to elude capture by military police. In September 1944 he was wounded, captured by searchers, imprisoned, court martialed, and sentenced to death. His spirit unbroken and now known as the “Jungle King,” he escaped.

Exhausted and seriously ill, Perry was finally apprehended on March 9, 1945 and hanged six days later, just over one year after he walked off from his army base. Thanks to the research of his biographer, Brendan Koerner, in 2007 and sixty-two years following his execution and burial in Hawaii, Perry’s only surviving sibling, Edna Wilson in Washington, D.C., received his cremated remains in the mail.