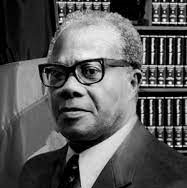 Herbert Augustus Blaize was a Grenadian politician and leader of the Grenada National Party. When Grenada was still a British Crown Colony, he served as First Chief Minister from 1960 to 1961 and again from 1962 to 1967. In 1967, he briefly became the first Prime Minister of the autonomous associated state of Grenada. In the first elections after the 1983 coups and the American-led invasion of Grenada, he served as Prime Minister from 1984 until he died in 1989.

Blaize was born on 26 February 1918 on the island of Carriacou, which together with the island of Petite Martinique is part of Grenada. He moved to Aruba where he worked for many years in the oil refinery of the Lago Oil and Transport Company. In 1953, he founded the Grenada National Party as a rival party to the Grenada United Labour Party of Eric Gairy, who was to be Blaize’s main political rival for the next 25 years. Blaize entered the legislature in 1957 and became Minister of Trade and Production.

Blaize was appointed Chief Minister in 1960 and also held the finance portfolio. He lost power to Gairy in 1961 and was reappointed in 1962 after Gairy was dismissed. In 1967, Grenada became an associated state within the British Empire, giving it more internal self-government. In 1976, Blaize’s center-right National Party allied with Maurice Bishop’s left-wing New Jewel Movement for that year’s elections, which Gairy and the GULP won. The alliance between Blaize and Bishop ended in 1979 when Bishop came to power. Blaize retired from politics and went back to living on Carriacou until the United States intervened in 1983, driving Bishop and his party from political power.

During the 1984 election campaign, Blaize merged his parties with several other center-right parties to form the New National Party, which won 14 out of 15 seats in the election. In addition to being Prime Minister, Blaize became Minister of Home Affairs, Security, Information, Finance, Trade, Planning, Industrial Development, and Carriacou and Petite Martinique Affairs.

Herbert Blaize died on December 19, 1989, near St George’s, Grenada, after a multi-year battle with prostate cancer. He was 71. Two days before his death, Blaize had been elected the first party leader of the newly formed National Party.