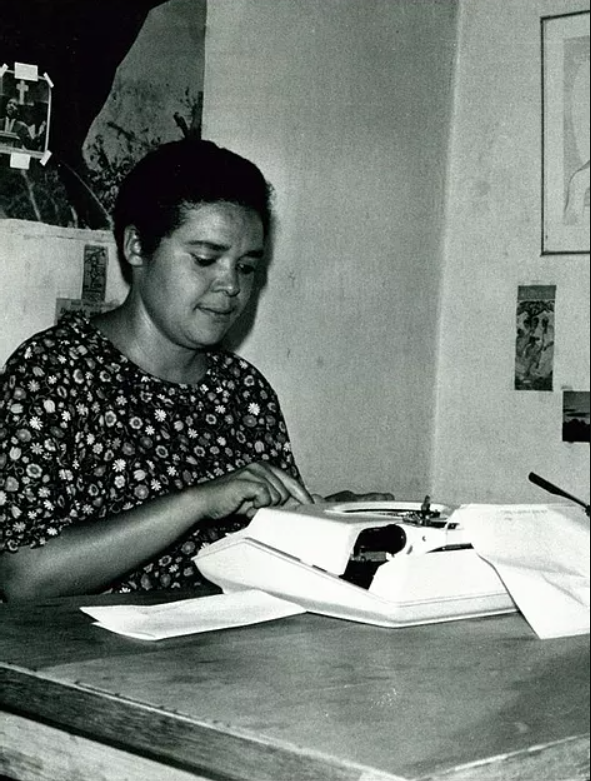 Acclaimed African writer Bessie Head was born on July 6, 1937, at Fort Napier Mental Institution in Pietermaritzburg, South Africa. Her mother, Bessie Amelia Emery (from the wealthy South African Birch family) had suffered from mental illness and was confined there at the time.  Bessie Amelia Emery died at the institution in 1943. Head’s father was an unidentified black male, who had entered into relations with Head’s mother. The birth itself was a criminal act, since at that time, extramarital sexual intercourse between blacks and whites was illegal. Thus, Head’s biracial identity would come to occupy much of her future writings.

Abandoned by her mother’s biological family, Bessie Emery was sent to live with a foster family, a Coloured couple, Nellie and George Heathcote. By 1950, she was declared a ward of the state and sent to St. Monica’s Home, an Anglican mission school that served Coloured girls, located in Durban, South Africa. In the same year, Emery began attendance at Umbilo Road High School, where she trained for her teaching certification.

After graduation, Emery worked as a primary school teacher between 1956 and 1958, but soon discovered that her passion was in writing. She moved to Cape Town in 1958 and became the only female writer for the Cape Town newspaper, Golden City Post. By the next year, Emery had moved to Johannesburg, where she began to take an interest in South African politics and affiliated with groups like the Pan-Africanist Congress.  After an arrest due to her political associations, Emery returned to Cape Town in the spring of 1960, where she began her own Pan-Africanist newsletter, the Citizen.

In 1961, Bessie Emery met and married Harold Head, another journalist. One year later she gave birth to their only son, Harold, named after his father.  For much of the early 1960s, Head worked for the journal New African, but in her spare time she wrote her novel The Cardinals, which was eventually published posthumously in 1993.

Head’s brief marriage came to an end in March 1964 when she and her son acquired one-way exit visas to Serowe in neighboring Botswana. Without a passport allowing her to return to South Africa, Head and her son were declared refugees in Botswana. After teaching for one year at the Tshekedi Memorial Primary School (1964-1965), she sought employment and shelter with the cooperative Bamangwato Development Association farm, in Radisele.

Here, Head acquired the collection of experiences that provided her with material for her first two published works: When Rain Clouds Gather (1968) and Maru (1971). In 1969, however, Head returned to Serowe, partly because she began showing signs of mental illness.

Bessie Head continued to write and publish despite her illness and had by the late 1970s become the nation’s most famous novelist.  Partly because of that fame the government of Botswana finally granted Head citizenship in 1979. Head continued writing up until her death from hepatitis on April 17, 1986, at the age of 48.