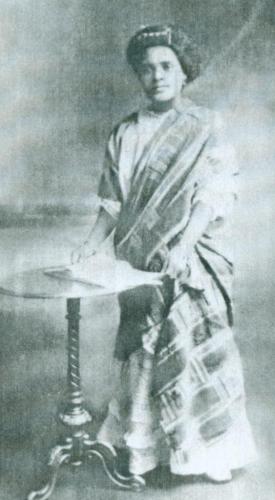 Adelaide Smith Casely Hayford was a Victorian feminist who dedicated her life to the education of girls in Sierra Leone.  Born on June 2, 1868, in Freetown, Sierra Leone, Casely Hayford was the second youngest of seven children of parents William Smith Jr. and Anne Spilsbury.  Her prosperous, educated family was part of the Freetown Creole elite.  When Adelaide was four years old, her family moved to England, but her mother died soon afterwards.  She was raised by her father and educated in England, Hayford excelled in her studies.  When she turned 17, she  went to Germany to study music.  In 1888, Smith returned to England, where she joined her father and new English stepmother.  In 1892, 24-year-old Smith moved to Freetown to try teaching as a career.  This experience gave her an opportunity to study the education systems in West Africa.

Smith married West African author Joseph Ephraim Casely Hayford after a courtship that lasted only a few weeks.  Their only daughter, Gladys, was born in 1904 with a malformed hip joint.   Casely Hayford took her daughter to England for medical treatment and remained there for three years.  Meanwhile, her marriage to Joseph Casely ended in divorce in 1909. In May 1914, Casely Hayford returned to Sierra Leone where she dedicated the rest of her life to educating African girls.

Embracing the middle class uplift ideology that was common in Victorian England, Casely Hayford believed that education would prepare young girls for their appropriate roles as wives and mothers and promote pride of racial identity.  As president of the Young Women’s Christian Association (YWCA) and as principal of the Girls’ Vocational School in Freetown, Sierra Leone which she founded, Casely Hayford promoted her educational principles throughout Sierra Leone and across West Africa.  She took two fundraising trips to the United States, the first in 1920 and the second five years later.  Each trip spread the word of her work to American audiences and raised funds to support the Girls’ Vocational School in Freetown.  Her travels also exposed Casely Hayford to the racial hierarchies and the exploitation of black female labor throughout the world.  Toward the end of her life, she began speaking and writing on both issues, although she never abandoned her goal of preparing young women for middle class domesticity.

Casely Hayford continued as principal of the Girl’s Vocational School until her retirement in 1940.  On January 24, 1960, Casely Hayford died in her hometown Freetown, Sierra Leone.  She will be remembered through memoirs and letters as a mother, an educator, a world traveler, an author, and an African patriot.