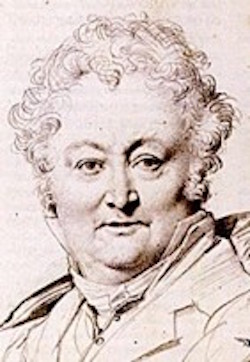 One of the few painters from the Americas with a degree of African ancestry who was active in the 1800s and has representative works in the Louvre Museum in Paris, France is Guillaume Guillon-Lethière. Born January 10, 1760, near Sainte-Anne on the island of Guadeloupe in the French Antilles, he was one of three sons of unmarried parents Pierre Guillon, a wealthy white landowner and notary public, and Marie-Françoise (called “Pepaye”), said to be a freed black slave but possibly a mulatto or quadroon. Recognizing his son’s exceptional artistic ability, and, despite his misgivings, his father gave in to Lethière’s pleas to let him study abroad, and at age fourteen, he entered the fine arts academy of Jean-Baptiste Deschamps in Rouen, France. Three year later, he trained in the studio of royal court painter François Doyen.

By 1784 Lethière had achieved several distinctions, among them winning second prize in the Prix de Rome competition for the New Testament scene Canaanite Woman at the Feet of Jesus. From 1786 and 1790, he studied in Rome where he was affected by the city’s history and ancient ruins. On his return to Paris, he submitted works to the Salon which earned him the reputation as a leading artist of the neoclassical movement, but also became a bitter rival of the preeminent painter of that movement, the radical and volatile Jacques-Louis David.

The product of a turbulent era, historical events inspired themes in much of Lethière’s work. His most frequently cited masterpieces over four decades include Scenery with Waterfall in 1791 (Saint-Lô Museum); Girl With Portfolio in 1799 (Worcester Art Museum); portraits of the Empress Josephine and the Grand Duchess Elisa Bonaparte in 1809; Italian Town in 1817 (Saint-Lô Museum); Surprise at the Bridge Over the Danube (Versailles); Death of Virginia in 1828 (Louvre), measuring 15’ x 25’½”; and Brutus Condemning His Sons to Death in 1830 (Louvre). Lethière’s Oath of the Ancestors, executed in 1822 and hung in the presidential palace in Port-au-Prince, featuring Haitian independence leaders Alexandre Pétion and Jean-Jacques Dessalines, suffered extensive damage in the horrific earthquake of 2010 and was assigned to Louvre art restoration experts for repair.

Nicknamed “l’Américain” by his friends who knew him to be a “man of color,” Lethière was accepted into French high society as were a handful of other mixed-race (sang-mêlé) persons from the Caribbean islands, like his close friend General Thomas-Alexandre Dumas, father of the famed writer Alexandre Dumas (père). And whereas David was favored by the Emperor Napoleon, Lethière benefitted greatly from his patron, Lucien Bonaparte, who as ambassador took the artist to Spain to collect art to transfer to Paris and arranged for his appointment as director of the French Academy in Rome in 1807. Awarded membership in the Legion of Honor and elected to the Institute of France in 1818, Lethière began teaching at the École des Beaux-Arts the following year. Lethière died April 22, 1832, the same year his Dutch wife passed, and was survived by two of their three sons and a foster daughter.