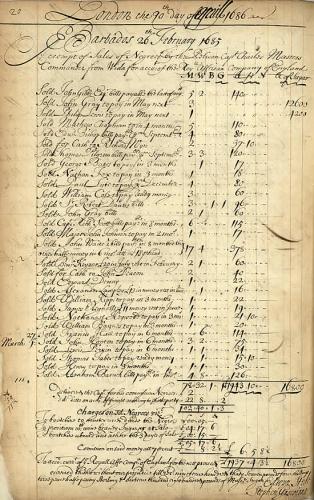 Chartered in 1672, the Royal African Company was a royally chartered company which had a legally based monopoly on English trade to West Africa until 1698. The monopoly specifically extended through five thousand miles of the western coast from Cape Sallee (in contemporary Morocco) to the Cape of Good Hope (in what is now South Africa).

The Royal African Company traded mainly for gold and slaves (the majority of whom were sent to English colonies in the Americas). Headquarters were located at the Cape Coast Castle (located in modern-day Ghana). The Royal African Company also maintained many forts and factories in other locations such as Sierra Leone, the Slave Coast, the River Gambia, and additional areas on the Gold Coast.

The Royal African Company lost its monopoly in 1698, although it continued to engage in the slave trade until 1731. It was replaced by the Company of Merchants Trading to Africa in 1752.

Royally chartered companies like the Royal African Company were important tools in the opening of the African continent to slave trade and later imperial colonizing ambitions. The Royal African Company was the second such attempt by Parliament, as they had chartered the Royal Adventurers into Africa in 1660. This first attempt failed due to factors relating to a war with Holland.