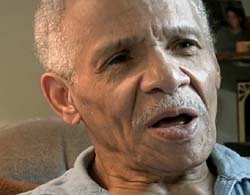 Stanley G. Grizzle, Portrait of a Street: The Soul and Spirit of College (2001, Rodna Films Inc.) by Sandra Danilovic
Fair use image

Stanley G. Grizzle founded the Railway Porter’s Trade Union Council and served as president of the Toronto Canadian Pacific Railroad (CPR) Division of the Brotherhood of Sleeping Car Porters (BSCP) from 1946 to 1962.

Grizzle was born in Toronto, Ontario in 1918, to Jamaican parents who immigrated to Canada in 1911. He became a railway porter at the age of 22 to help support his family. In 1938 Grizzle helped form the Young Men’s Negro Association of Toronto, initiating a period of activity which would make him one of the leaders in the black Canadian campaign for civil rights.

After serving in the Canadian Army in Europe during World War II, Grizzle returned to play a more active role in the BSCP he had joined years earlier.  He was elected president of the Canadian BSCP in 1946 and by the early 1950s Grizzle had became a member of Canada’s Joint Labour Committee to Combat Racial Intolerance.  He led groups which met with provincial and federal government officials to discuss antidiscrimination legislation and appeared often on radio and television to describe the issues facing African Canadians.  On April 24, 1954, Grizzle plunged into the controversial issue of immigration when he organized the first delegation of Canadian blacks to meet with members of the federal cabinet to discuss discrimination against West Indian applicants for Canadian citizenship.

In 1959 Grizzle and Jack White became the first African Canadians to seek seats in the Ontario legislature.  Running as a Co-operative Commonwealth (CCF) candidate, Grizzle won nearly ten thousand votes in a losing election effort.  The following year he was appointed an Officer of the Ontario Labour Relations Board, becoming the first black Canadian to hold a position at this level of provincial government.   Grizzle remained on the Board until 1978 when Prime Minister Pierre Trudeau appointed him Judge of the Canadian Court of Citizenship, again another first for an African Canadian.

In 1996 Grizzle completed an autobiography he titled My Name’s Not George which described his life as a sleeping car porter on the CPR and as a political activist.  Grizzle also discussed the dual roles the BSCP union has traditionally embodied in both the United States and Canada, trade unionism and civil rights.  Grizzle also described his role in the eventual removal of the barriers that prevented porters from being promoted to conductors.

In July 2007, Stanley G. Grizzle was honoured at Rideau Hall in Ottawa, for contributions and donations to Library and Archives of Canada. Four months later Toronto Mayor David Miller led a dedication ceremony for Stanley G. Grizzle Park which was located on Main Street in the city’s east end.  Stanley G. Grizzle continues to make his home in Toronto.