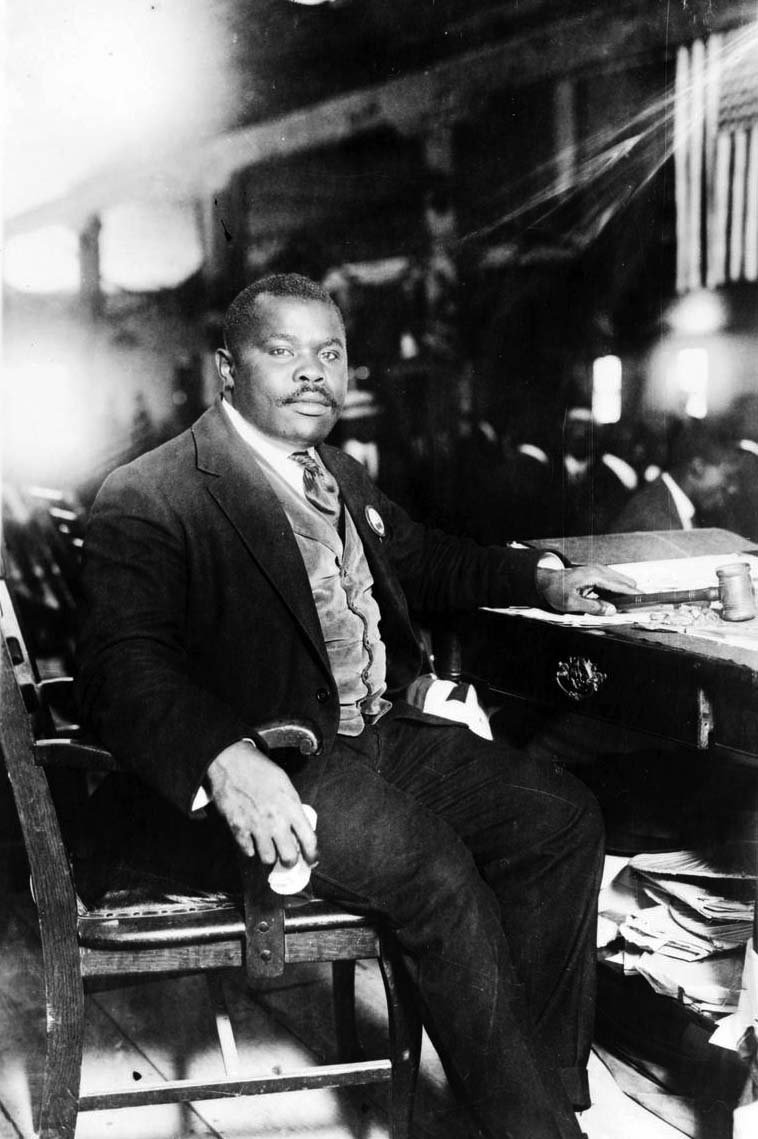 Marcus Mosiah Garvey, one of the most influential 20th Century black nationalist and Pan-Africanist leaders, was born on August 17, 1887 in St. Ann’s Bay, Jamaica.  Greatly influenced by Booker T. Washington’s autobiography Up From Slavery, Garvey began to support industrial education, economic separatism, and social segregation as strategies that would enable the assent of the “black race.” In 1914, Garvey established the Universal Negro Improvement Association (UNIA) in Kingston, Jamaica, adopting Washington’s inspirational phrase “Up, you mighty race; you can conquer what you will.”  By May of 1917, Garvey relocated the UNIA in Harlem and began to use speeches and his newspaper, The Negro World, to spread his message across the United States to an increasingly receptive African American community.  His major audience included the thousands of Southern blacks who were then migrating from the “shadow of slavery and the plantation” to the urban North.  Black veterans of World War I were another Garvey audience.  Most of them had experienced both French equality and US military bigotry and returned home as militant “race men.”  They were attracted to Garvey’s calls.   The UNIA grew larger still following the race riots in the Red Summer of 1919.

Garveyism resonated with the rapidly urbanizing black community and spread beyond the United States to the Caribbean, Latin America and Africa.  Regardless of the locale, Garvey’s UNIA promised black economic uplift via self-reliance, political equality via self-determination, and the “liberation of Africa from European colonialism via a Black army marching under the Red, Black, and Green flag of Black manhood.”  Africa’s redemption, according to UNIA supporters was foretold in the messianic Biblical Psalms 68:31 “Princes shall come out of Egypt; Ethiopia shall soon stretch out her hands unto God.”  However, it was Garvey’s ability to convey, in his vivid and powerful speeches, the distinct possibility of achieving these goals that led the UNIA to become an organization of millions.  When Garvey bellowed, “I am the equal of any white man [and] I want you to feel the same way,” he inspired the faithful and attracted the curious.  Addressing the gender question Garvey wrote, “Black queen of beauty, thou hast given color to the world…Black men worship at thy virginal shrine of purest love…!”  Garvey even created a new black faith by ordaining Reverend George Alexander McGuire as Chaplain General of the African Orthodox Church. McGuire’s sermons urged Garveyites to “Erase the white gods from your hearts.”

At the 1920 UNIA International Convention at Madison Square Garden, with twenty five thousand delegates and observers in attendance, Garvey issued the Declaration of Rights of the Negro Peoples of the World.  The convention also produced the Universal Ethiopian Anthem.  The Negro World, the official newspaper of the UNIA, also spread the organization’s philosophy globally.  With a circulation of over 200,000 and published in three languages, Spanish and French as well as English, the Negro World was read on four continents.

Garvey’s most ambitious effort was the establishment of the Black Star Steamship Line. Garvey hoped that this joint stock corporation would develop lucrative commercial networks between the United States, the Caribbean, and the continent of Africa.  He also hoped that his three ships would help in the return of millions of blacks in the “Diaspora” to Mother Africa.  However, because of heavy debt and mismanagement, the steamship line went bankrupt and Garvey in January 1922 was arrested and charged with using the US Mail to defraud stock investors.

Ultimately, Garvey garnered the wrath of African American leaders when he met with the Ku Klux Klan leader, Edward Young Clark in Richmond, Virginia in June 1922.  Garvey naively believed the two organizations could work together since they both supported the goal of racial purity.  Clark in fact did promise some financial assistance for the UNIA.  After hearing of this meeting, however, the NAACP leader, W.E.B. DuBois, called Garvey the greatest enemy of the Negro race. The Urban League called Garvey a “swindler” and black union leader A. Philip Randolph said that Garvey and Garveyism should be purged from American soil.

Various civil rights organizations now mounted a coordinated “Garvey Must Go” campaign.  The Justice Department, seeking to discredit Garvey because it felt he represented a threat to colonial interest and menaced racial peace in the US, hired its first black agent, James Wormley Jones, to infiltrate the UNIA. Garvey was convicted of mail fraud in 1923 and sentenced to five years in federal prison.  In part, because of a letter writing campaign orchestrated by Garvey’s second wife, Amy Jacques Garvey, President Calvin Coolidge commuted his sentence in 1927 in exchange for the UNIA President accepting deportation.  Garvey spent his last years in Jamaica trying to revive his political fortunes and eventually died in London, England in 1940, never having set foot on African soil.