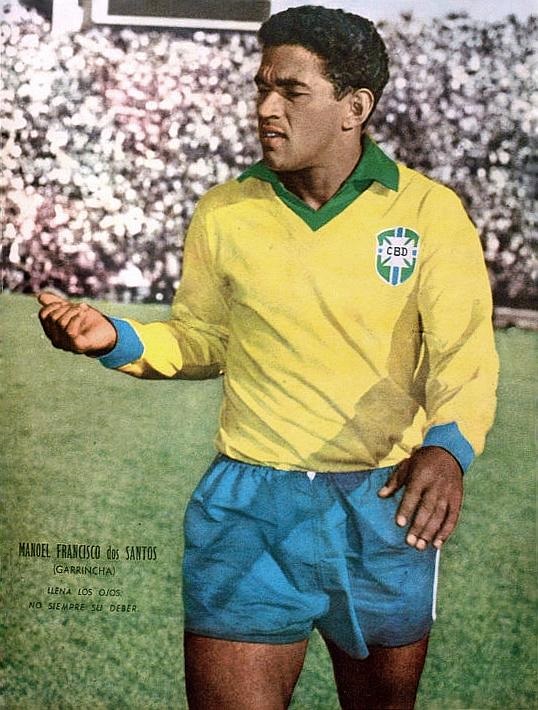 Manoel Francisco dos Santos, renowned Brazilian soccer player, was born in the State of Rio de Janeiro, Brazil, on October 28, 1933 and died on January 20, 1983. A congenial deformity of his leg bones (inward leaning right leg and outward leaning left) earned him the childhood nickname of Garrincha, the little bird wren, small and frail. His life was tragic as his soccer was joyful, suffering from alcoholism as his father did, Garrincha died poor at age 49.

Known for his dribbling abilities, Garrincha won two world cup titles, in 1958 and 1962. His physical condition, however, made it hard for him to begin his soccer career. Conversely, that condition allowed him to make his astounding dribbles, fooling his adversaries who could never anticipate in which direction his body would go.

In 1953, he joined Botafogo Club, in Rio de Janeiro, quickly becoming a part of the national squad in 1955. His international record included 50 caps, 12 goals, scoring 5 times in his 12 final world cup matches. More importantly, he led Brazil to two consecutive world titles after the demoralizing defeat at home during the 1950 FIFA World Cup in Rio de Janeiro.

“The joy of the people” (alegria do povo), and “the angel with bent legs,” were a few of the expressions associated with Garrincha. Paired with the legendary player Pelé during the late 1950s and 1960s, they helped create the notion of Brazil’s beautiful soccer that enchanted the world.

The joy Garrincha brought the country and sport of soccer did not materialize in his personal life. In his last years, after many broken relationships, he was involved in several car crashes, including running over his father and killing his mother-in-law, which only exacerbated his drinking. Nevertheless, it is for the delight of his game that he is remembered, as the embodiment of the promise of a better, more blissful and ever triumphant Brazil.