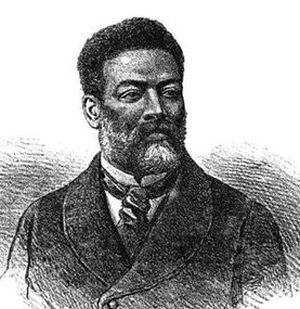 Luis Gonzaga Pinto da Gama (Luis Gama) was a Brazilian poet, journalist, legal activist, abolitionist leader, and former slave. He was born in 1830, a free mulatto in Salvador, the capital of Brazil’s Bahia province. His mother, Luisa Mahin, was a black woman from Ghana who had formerly been enslaved. Mahin made a living for a time selling vegetables and fruits in the streets before helping to lead two slave revolts. Her involvement in the rebellions resulted in her being deported back to West Africa. Luis Gama’s father was a Portuguese aristocrat about whom little is known.

Gama was sold into slavery at age ten by his father, who was trying to pay off gambling debts. However, the sale of the boy was illegal, as Luis Gama had been born to a free mother and the trade of slaves was no longer allowed in Brazil. Nonetheless, Gama lived and worked as a house slave for eight years in Sao Paulo. In 1847 the seventeen-year-old befriended Antonio Rodrigues do Prado, a law student who taught Gama to read and write, and piqued Gama’s interest in learning more about law.

The young law student also encouraged Gama to gather documentation proving the illegality of his sale into slavery. Once Gama had gathered these documents, he ran away and joined the army. While serving there he worked as a clerk at the private law firm of Francisco Maria de Sousa Furtado de Mendonça, who mentored Gama in law and would later become the godfather of Gama’s son. Gama served in the military for six years, but was discharged in 1854 for insubordination.

After his discharge Gama began working in Sao Paulo police stations as a copyist and clerk while writing a book on the side, Primieras Trovas Burlescas, which was published in 1859.  Primieras was a collection of satirical social commentary in the form of poetry. Its publication made Gama a prominent and controversial figure. Some of the best-known poems from the collection criticized Brazilian mulatto society for coldly disregarding their oppressed black countrymen and for romanticizing whiteness and the high social status associated with it. This poetic criticism was accompanied by Gama’s increasing involvement with abolitionism.

Gama joined the growing liberal political movement in Brazil and helped establish the anti-monarchy, pro-democracy Brazilian Republican Party. Not all abolitionists were anti-monarchy, nor were all in favor of black participation in abolitionist activities. There were also divisions in the party over the timeframe for the emancipation of slaves in Brazil. In 1873 the party drafted and approved a bill that called for the gradual liberation of slaves in Brazil. Gama wanted immediate rather than gradual emancipation and angrily left the party because of it.

The legal knowledge Gama had gained in previous years allowed him to help free over five hundred slaves. Without formal legal training, he argued successfully in court for the freedom of people who had been enslaved in violation of an 1831 law that had declared all incoming Africans to be free. The self-made lawyer was immensely passionate and provocative in the courtroom, sometimes openly calling for slave rebellion.

Gama established an abolitionist journal called Diabo Coxo in 1864.  Four years later he also began writing anti-slavery pieces for a prominent newspaper, O Ipiranga and in 1869 he joined the editorial board of a newspaper called Radical Paulistano.   In 1881, Gama started a fund, Caixa Emancipadora Luís Gama, to purchase the freedom of slaves. The following year he founded the Abolitionist Center of Sao Paulo.

Unfortunately, the preeminent Brazilian abolitionist’s life was cut short just as slaves in his nation were near liberation. He died of diabetes complications in 1882.  Six years later, in 1888, Princess Isabel, the Brazilian sovereign, signed the Golden Law, freeing the remaining slaves in her nation.