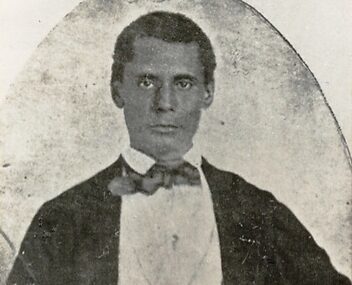 Francisco del Rosario Sánchez was one of the founders of the independent Dominican Republic. He was born on March 9, 1817, in Santo Domingo. His parents were Narcisco Sánchez Ramon, a “pardo” (brown person) and Olaya del Rosario de Belen, a white woman from the Canary Islands. Because of their different racial and social-economic status they only married after a special authorization given by the mayor of Santo Domingo. His surnames are inverted because his parents were not married at the time of his birth, marrying in 1819.

Little is known of his formative years but he did teach himself both Latin and French. He was also a self-taught lawyer. As a young man, Sánchez, traveled to the United States and Europe where he was greatly influenced by democratic and enlightenment thinking. In 1938 he joined with several other Dominicans who were unhappy with the Haitian occupation of their country. Along with Juan Pablo Duarte and Matias Ramon Mella, Sánchez were the main leaders of this group. When Duarte, who was the leader of the group, was forced into exile in Venezuela by the Haitians, Sánchez then took over leadership of the pro-independence group.

In January 1844, Sánchez and several other prominent leaders gathered to write the Manifest of Independence. On February 27, 1844, Haitian troops were expelled from the country and the new Dominican Republic was proclaimed. Sánchez was saluted as chief of the government junta by the rebels whose February 27, 1844 seizure of Ozama Fortress signaled the success of the Dominican War of Independence. As head of the junta, he was the first head of state of the newly independent nation.

After several months of internal fighting among the revolutionaries, Pedro Santana emerged as President in August 1844. Sánchez and several others were sent into exile by Santana. Four years later when Santana was no longer in power, Sánchez returned to the Dominican Republic. He served as a Public Defender, on the Court of Appeals and the Supreme Court before being forced into exile again.

Santana became president again and sought to have his country annexed by Spain. Sánchez rebelled against this and was placed in prison in August 1859. He was banished from the country a month later and moved to the island of St. Thomas in the then Dutch Virgin Islands. He approached Haitian President Fabre Nicholas Geffrard. After some initial reluctance, the Haitians allowed Sánchez and his followers to gather in Haiti and go back to their cause.

On May 2, 1861, Sánchez and his followers invaded the Dominican Republic. They were ambushed and tried in court for treason. Sánchez was sentenced to death, executed on July 4, 1861, and quickly buried in the cemetery of San Juan de la Maguana near Santo Domingo although today he is entombed in a mausoleum, the Altar de la Patria, alongside Duarte and Mella. Sánchez was 44 at the time of his death.