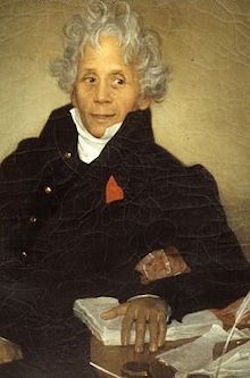 Francois Fournier de Pescay was the first known African-descended physician to practice medicine and surgery in Europe. Fournier de Pescay, the son of French planter François Pescay and Adélaïde Rappau, a free mulatto (mulâtresse libre), was born on September 7, 1771 in Bordeaux, France. His parents left the French colony of Saint-Domingue (now Haiti) earlier that year and settled in Bordeaux. Little is known of Fournier’s childhood and young adult years in Bordeaux, a city accustomed to the sight of blacks and biracial immigrants mainly from the French West Indies. These immigrants numbered 174 residents in a 1778 census. Unlike in the colonies, there were few laws impeding upward mobility of “persons of color” (les personnes des couleur), thus Fournier benefited from an excellent education in Paris followed by medical training in Bordeaux.

Swept up in the upheaval of the French Revolution, twenty-one-year-old Fournier, along with his brothers Jacques Philippe and Louis Georges, joined the army in 1792. During his service as an army surgeon (chirugien aide-major), he demonstrated extraordinary scientific ability by becoming the first Frenchman to duplicate Englishman Adair Crawford’s experiments with barium chloride in the treatment of tuberculosis which he later published. He left the military in 1799 to practice medicine in Brussels, Belgium, where he co-founded the city’s medical society, Société de Médecine de Bruxelles, and served as its first secretary-general, recording volumes of proceedings. In 1803 he founded the arts and sciences journal Le nouvel spirit des journaux and later published an eighty-six-page treatise on tetanus which was lauded by the Medical Society of Paris. Moving from Brussels to Strasbourg, France, he became professeur-directeur at the École Spéciale de Médecine de Strasbourg.

Fournier’s reentry into the military in 1806 as surgeon-major was uneventful until 1808 when he was ordered to the Château de Valençay to be the personal physician of the Prince of Asturias who in 1813 ascended the throne of Spain as King Ferdinand VII. While attending the confined prince, he focused his attention on early French literature, translating poetry and retelling old legends. With the departure of the prince and the return of the Bourbon monarchy in 1816, Fournier was conferred the Order of the Legion of Honor by King Louis XVIII in recognition of his exceptional medical career and service to the empire. He was also appointed secretary to the Council of Health (Conseil de Santé). His only son, Gustave-François, a writer of some note, died in 1818 at age twenty. In the post-Napoleonic era, Fournier returned to research in earnest, publishing not only on various human afflictions such as eye disease, dysentery, scabies, and fever but also medical histories and biographies of physicians.

In 1823 Fournier sailed with his family to Port-au-Prince to direct the recently established Académie d’Haiti. He also worked in Haiti as inspector-general for health services before returning to France in poor health in 1828. After regaining his health in the South of France, he was employed as water inspector for the small town of Barèges, 55 kilometers southeast of the resort city of Pau where he died July 8, 1833 at the age of 61, survived by his four daughters.