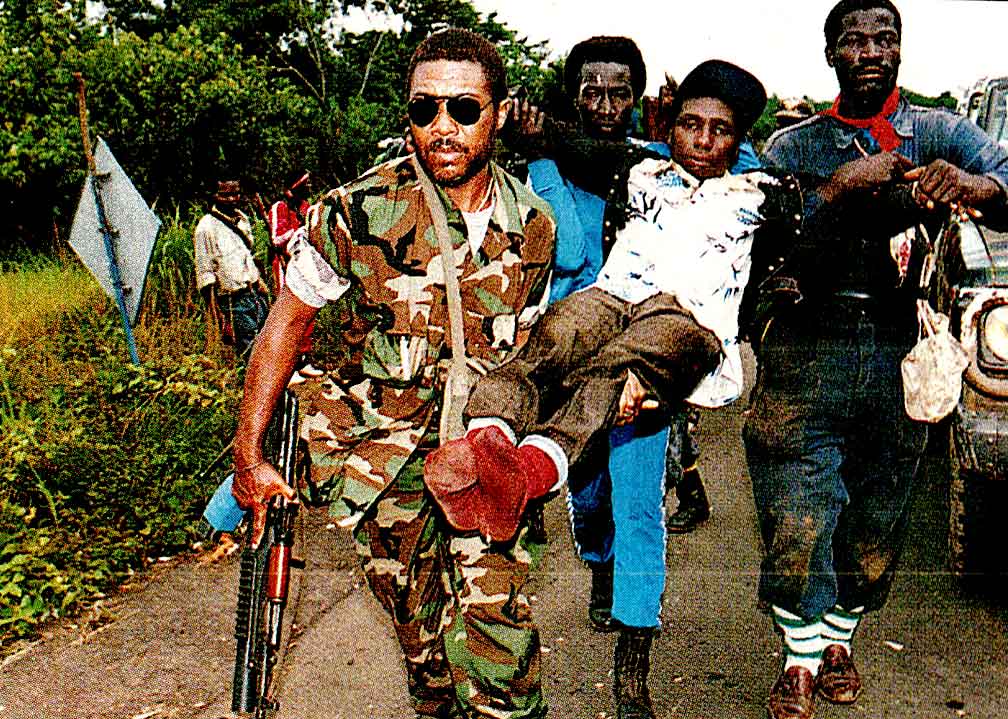 The First Liberian Civil War was one of Africa’s bloodiest civil conflicts in the post-independence era. The war claimed more than two hundred thousand Liberian lives in a nation of 2.1 million people and displaced a million other citizens in refugee camps in neighboring countries. On December 24, 1989, a band of Libyan-trained rebels led by Charles Taylor invaded Liberia from the Ivory Coast. Taylor’s rebel group which was called the NFPL (National Patriotic Front of Liberia) consisted mostly of Gio and Mano peoples from Nimba County in eastern Liberia.  The Gio and Mano people had long been opposed and persecuted by Liberian President Samuel Doe and his Krahn ethnic group.

Taylor’s NPFL, which included former Liberian military men and civilians, was one of the first to recruit children as soldiers. The NPFL clashed with government forces and other ethnic militias supporting President Doe between December 1989 and mid-1993. During that period, all groups involved in the fighting generated civilian causalities, but Taylor’s NFPL was responsible for the slaughter of thousands of Liberians, both military and civilians, who opposed him. As the NFPL forces advanced toward Monrovia, the capital of Liberia, in 1990, they specifically targeted people from the Krahn and Mandingo ethnic groups who remained loyal to the Doe government.

Eventually, because of the high level of civilian casualties, Nigerian and Ghanaian troops from the Economic Community of West African States (ECOWAS) entered Monrovia ostensibly as peacekeepers, but their presence prolonged the war by aiding President Doe’s beleaguered troops. Doe was captured and killed on September 9, 1990, by Prince Johnson and his rebel group, the Independent National Patriotic Front of Liberia (INPFL) which had been waging a separate campaign against the government.

ECOWAS troops prevented Taylor from capturing Monrovia and instead forced the creation of the Interim Government of National Unity (IGNU) led by Dr. Amos C Sawyer who became the nation’s president. Taylor, however, refused to work with this government and continued fighting.

As the war continued, at least seven factions became involved the conflict, including the National Patriotic Front of Liberia (NPFL), the United Liberian Movement of Liberia for Democracy (ULIMO), the Lofa Defense Force, and many members of the Armed Forces of Liberia who were still loyal to Doe’s government.

The fighting between these various factions continued and generated more civilian casualties.  Finally, in 1992 Taylor and the NFPL launched a large scale attack on Monrovia, called Operation Octopus. The siege of the capital lasted for two months and trapped ECOWAS troops who were unable to gain an advantage in this ongoing civil war. Eventually, in August 1996, Nigerian officials forced the major warring factions to sign the Abuja Accord requiring that they all agreed to disarm and demobilize by 1997 and abide by UN-monitored elections. The elections gave victory to Charles Taylor, leader of the National Patriotic Party, in defeating Ellen John Sirleaf; for the first time, Taylor ruled all of Liberia.