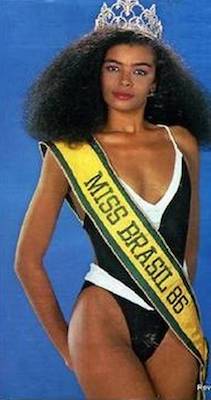 In 1986 eighteen-year-old Deise Nunes became the first woman of visible African descent to be named Miss Brazil in the competition’s thirty-two-year history.  As the Brazilian winner, she automatically went on to compete in the Miss Universe competition held in Panama City, Panama, in July 1986.  Nunes placed sixth in the international competition.

With curly, natural, and voluminous hair, she became the controversial symbol of Brazilian beauty. Nunes’s triumph coincided with the 98th Anniversary of the freeing of Brazil’s slaves, descendants of Africans forcibly imported by Portuguese colonial masters to cut sugar cane, starting in the sixteenth century.  It would be thirty years before another black woman, Raissa Santana, would claim the title of Miss Brazil in 2016.

Brazil is one of the most racially-mixed nations in the world.  Almost from its founding in the 1500s until the 1880s, people of African descent were the majority of the country’s population.  Even In 2016, Brazil’s population distribution was as follows: white 47.7 percent; mulatto (mixed white and black) 43.1 percent; black 7.6 percent; Asian 1.1 percent, indigenous 0.4 percent. Racial background and gradations of color actually fall into a number of categories, but Afro-Brazilian generally refers to a Brazilian with some African ancestry.  Among the general population, however, the term does not have widespread usage.  People who are noticeably of African ancestry are generally referred to as negro or simply preto (“black”). Multi-racial Brazilians, or pardos, also have a significant degree of African ancestry.  These two categories are among five color categories used by the Brazilian Census, along with branco (“white”), amarelo (“yellow,” East Asian), and indígena (Amerindian).  Pretos tend to be predominantly Sub-Saharan African ancestry while pardos have predominantly European blood, although all three ancestries (European, African, and Native American) are often present.

Such distinctions are important in Brazilian identity and culture. Deise Nunes is considered a pardo.  She is the daughter of a single mother who, at age seventeen, became pregnant from the nephew of her employer.  She was born in Puerto Alegre, southern Brazil’s most important port city, on March 30, 1968, to Ana Maria Nunes, who washed clothes for a living. ??

Nunes attended Santa Inés College in Porto Alegre, graduating in 1985. Before becoming Miss Brazil, Deise Nunes had already won ten regional beauty contests. In 1977 nine-year-old Nunes was elected Miss Congeniality of her school, and six years later, she was named First Princess in another school contest. Despite these achievements, Nunes and her supporters claimed she faced considerable racial prejudice.  Deise Nunes became a professional model in 1984 and later ran a modelling school in Porto Alegre.

At the time  of her crowning as Miss Brazil, Nunes dated Spanish singer Julio Iglesias, and later had a brief engagement with the footballer, Edson Arantes do Nascimento (Pelé) in 1986. At the end of  the 1980s, she entered into a relationship with businessman Lair Ferst,  whom  she would  later marry and have two children, Peter and Julia.