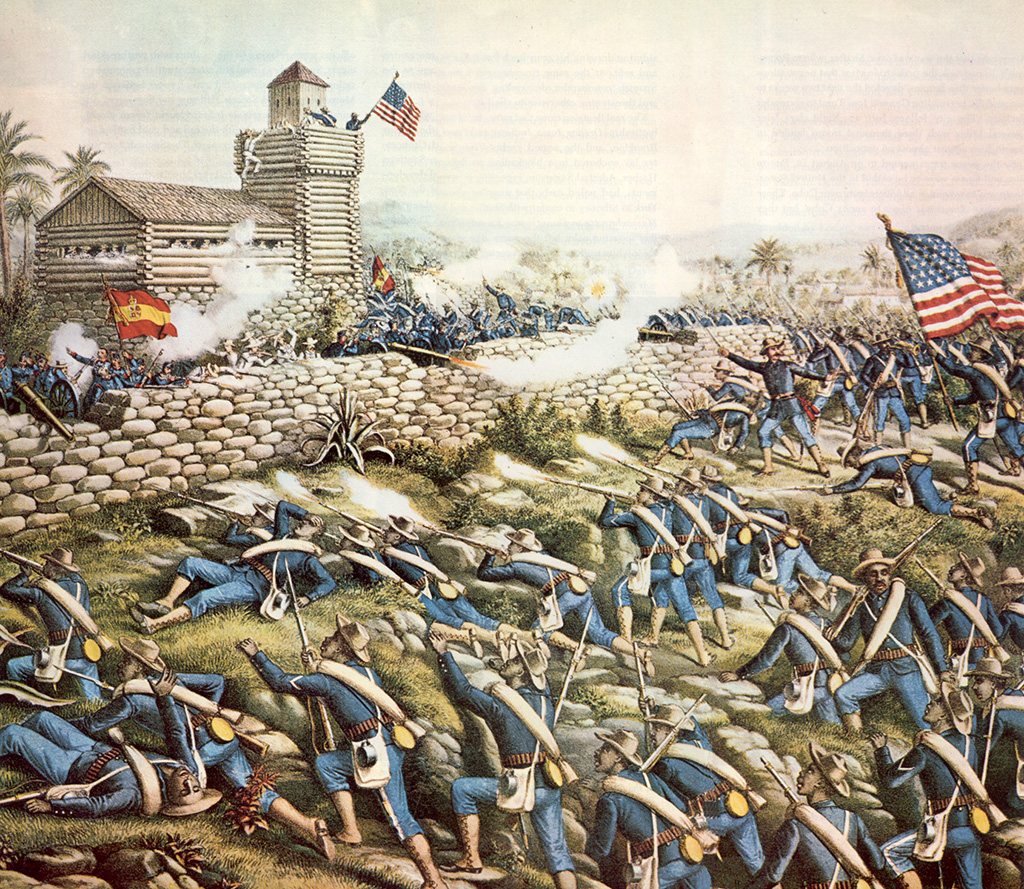 During the Spanish American War, several battles were fought that included Buffalo Soldiers. The Battle of Kettle Hill (generally known as San Juan Hill) fought on July 1, 1898, was the most significant since it was the only battle that involved all four buffalo soldier regiments, the 9th and 10th Cavalry and the 24th and 25th Infantry.

After the Battle of El Caney on July 1, 1898, which engaged the 25th Infantry, over 8,000 American troops pressed on later that day towards San Juan Heights, where another battle was taking place. These troops included 1,250 black soldiers from the 9th and 10th Cavalry, led by Brigadier General Samuel S. Sumner as part of his Cavalry Division, and the 24th Infantry Regiment who were part of Brigadier General Jacob F. Kent’s 1st Infantry Division. Lieutenant Colonel Theodore Roosevelt’s Rough Riders were also part of the assault on San Juan Heights.

San Juan Heights had two high spots along its north-south axis, one called San Juan Hill and the other later named Kettle Hill by the troops. On July 1, General William Shafter, the overall commander of U.S. forces in Cuba, ordered attacks on the Spanish blockhouse at El Caney and San Juan Heights. Generals Sumner and Kent lined up for an attack on San Juan Heights and waited for Brigadier General Henry W. Lawton’s division to arrive from El Caney which included the 25th Infantry.

The Spanish forces at San Juan Heights were well armed and well entrenched. Once American reinforcements arrived and the battle commenced, hundreds of U.S. soldiers fell under Spanish gunfire in an area known as Hell’s Pocket, before reaching the base of the hills. American forces then split into two groups to take both hills simultaneously. Sumner’s troops which included the 24th and 25th Infantry, charged up the side of San Juan Hill while Roosevelt’s Rough Riders, units of the all-white 3rd Division, and the 9th and 10th Calvary, headed up Kettle Hill. Racial segregation broke down during the battle as white and black soldiers intermingled during the charge. Sergeant George Berry of the 10th Cavalry, for example, carried the colors of 3rd Division, along with his own regiment’s flag.

By the end of day of July 1, U.S. forces had taken both San Juan Hill and Kettle Hill. Theodore Roosevelt’s Rough Riders got most of the credit for taking Kettle Hill but the victory belonged to all of the soldiers who charged up the hill including the 9th and 10th Cavalry. Twenty-six Buffalo Soldiers died that day and several troopers from the 9th and 10th Calvary, and the 24th and 25th Infantry were later recognized and awarded for their bravery. Quarter Master Sergeant Edward L. Baker, Jr of the 10th Calvary, for example, was wounded by shrapnel and was awarded The Medal of Honor for his heroism. With control of San Juan Heights overlooking the city of Santiago, American forces began the siege of the city on July 2.

On July 3, U.S. warships destroyed the Spanish fleet off the coast of Santiago effectively trapping Spanish forces. On July 17, the Spanish Army surrendered the city, and all of Cuba, ending the Spanish-American War.