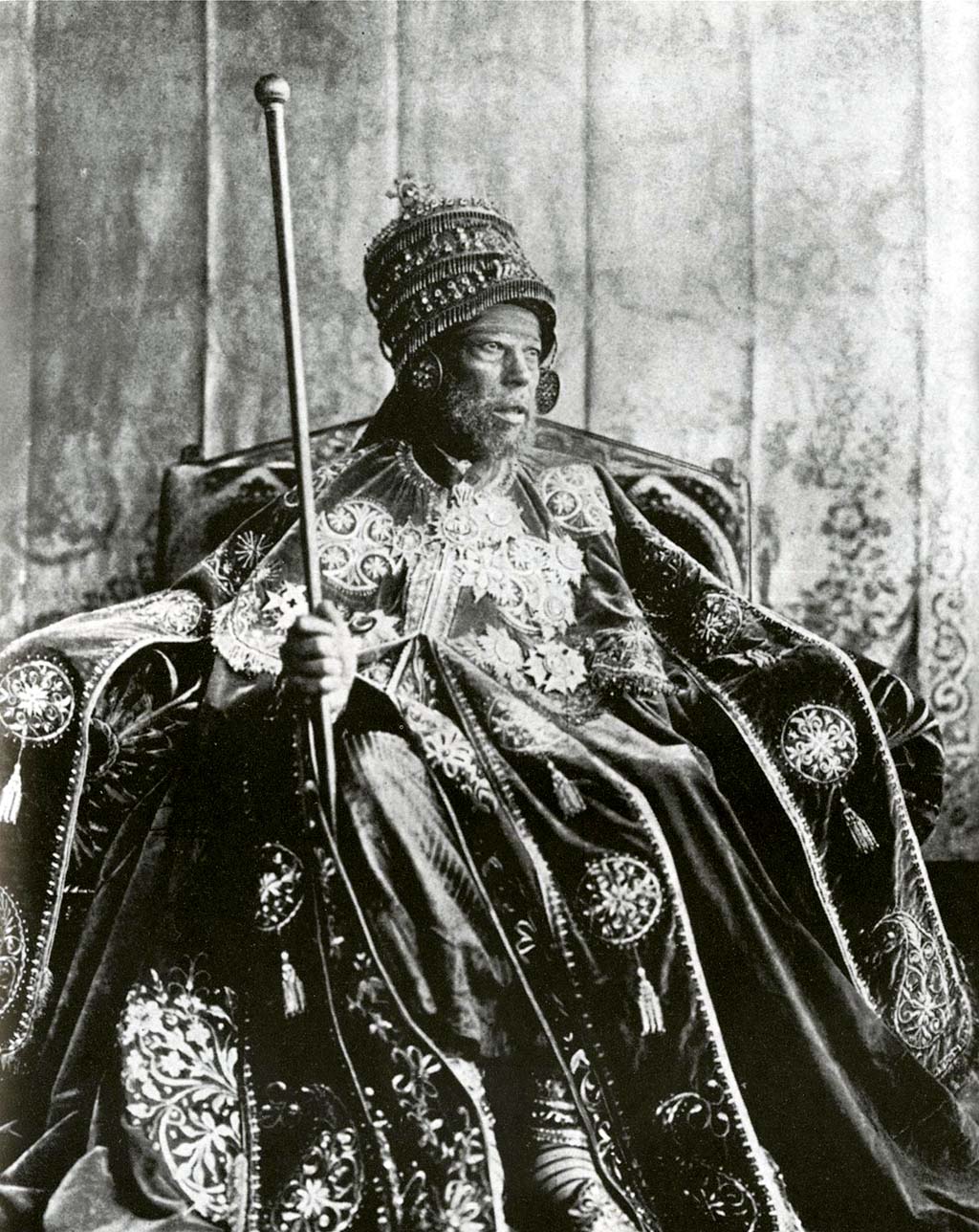 Emperor Menelik II was one of Ethiopia’s greatest leaders, ruling as King and Emperor of Ethiopia from 1889 to 1913. He was born Sahle Miriam on August 17, 1884, in Ankober, Shewa, Ethiopia. His mother, Woizero Ejigayehu Lemma Adyamo, was a palace servant, and his father was Prince Haile-Melekot, Son of King Sahle Selassie. During an 1855 invasion by Emperor Tewodros II, Melekot was killed and Miriam was taken prisoner and held captive for ten years in the emperor’s mountain stronghold of Amba Magdela. He was raised alongside the Emperor’s children and treated as a prince. Miriam escaped from Magdela in 1865 and returned home to Shewa. It is reported that Miriam was six feet tall and had a dark complexion with smallpox marks on his face and fine white teeth.

Ato Bezebeh, appointed governor by Emperor Tewodros II, fled the region when Miriam returned, and Miriam became Negus (King) of the region. When Emperor Tewodros II died in 1868, Miriam desired to become Emperor, but had to submit to Tekle Giorgis (1868–1872) and Yohannes IV (1872–1889). Meanwhile, Miriam began to incorporate several kingdoms and states of southern Ethiopia into his reign and by the time of Yohannes IV’s death in 1889, Miriam had become the most powerful ruler in Ethiopia, both King and Emperor.

Miriam assumed the name Emperor Menelik II upon his coronation on November 3, 1889. His ancestors had been rulers of Menz, the heartland of Shewa since the 17th century, and it has been claimed that they were related to the Solomonid line of emperors who ruled Ethiopia between 1268 and 1854. The crown name Menelik II was significant, as Menelik I was the legendary son of Solomon and Makeda, the Queen of Sheba. Menelik II expanded Ethiopia almost to its present-day borders.

Just as Menelik II was crowned, Italians had settled along the Red Sea coast, establishing a colony at Eritrea. The Ethiopians and Italians initially reached an agreement, the Treaty of Wichale, but the Italian interpretation of the agreement gave Italy a protectorate over Ethiopia. When Menelik II learned of this, he renounced the treaty, which resulted in several skirmishes, and a subsequent major battle at Adwa. The Italian army was defeated in the Battle of Adwa on March 1, 1896. With the treaty canceled, The Italians retreated.

Menelik II began large-scale modernization which included bringing back a national currency, constructing buildings for improved educational facilities and ministries, installing a railway from Djibouti to the new capital of Addis Ababa, and establishing the first telephone and telegraph systems in the Empire.

To view products related to Menelik II in the BlackPast Store click here.