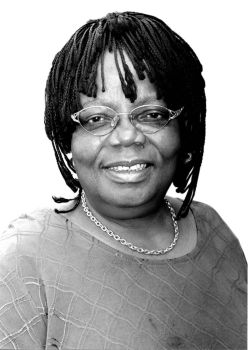 Through her personal struggles and exceptional writing abilities, Florence Onyebuchi “Buchi” Emecheta constructed a collection of literary works that reflected the lives of African women.  Emecheta was born on July 21, 1944, in Yaba, Nigeria into a family with strong ties to their cultural traditions.  Her father, Jeremy Nwabudinke, was a railroad worker who died when she was eight years old. Her mother, Alice Okwuekwuke, died when she was eleven, leaving Buchi and her brother to be raised by relatives. After their deaths, Emecheta’s aunt began to shape her literary imagination and writing style.

After earning a scholarship, Emecheta graduated from the Methodist girls’ high school in Lagos.   When she was unable to attend the University of Ibadan (UI), she married Sylvester Onwordi in 1960, at the age of 16.  After working for the American Embassy in Lagos for two years and bearing two children, the family moved to London, England, where Onwordi attended university. She began to write in her spare time.

By 1966, the couple had five children, and Buchi Emecheta was suffering in an abusive marriage. After her husband burned her first novel, Emecheta left him.  She supported her children by working at the British Museum’s library while working toward a sociology degree. She then obtained a job at the New Statesman writing a column for the magazine, which served as the foundation for the novel, In the Ditch (1972).  In 1974, the same year she received a degree in sociology from the University of London, Emecheta released Second-Class Citizen.  These two novels reflected her experiences of poverty, motherhood, and immigration; they were republished together as Adah’s Story in 1983.

Emecheta continued writing while working as a sociologist and youth worker.  In 1976 she wrote two plays for the BBC: The Ju Ju Landlord, published as The Bride Price that same year, and A King of Marriage, later re-imagined as a novel.  In 1977, she wrote The Slave Girl which argued the similarity of marriage and slavery.  That novel earned her the Jock Campbell Award for literature for Commonwealth Writers in 1978.  Emecheta’s most well-known novel, The Joys of Motherhood (1979), addressed the widespread belief that African women can only gain importance through bearing a son.

Beginning in the late 1970s, Emecheta was a frequent visiting professor in the United States as well as a professor of literature at the University of Calabar in eastern Nigeria. During this time, she also began to publish children’s books and literary works for young adults.  In 1982, she established Ogwugwu Afor, a publishing company focused on African literature and two years later published her autobiography, Head Above Water.

In 1992, Emecheta was awarded an honorary doctorate of literature from Farleigh Dickinson University in Madison, New Jersey. She published more than 20 works of fiction and non-fiction, including her last novel,  The New Tribe, published in 2000.  Although her writing stirred much controversy among African readers and critics, American and European critics regarded Emecheta as one of Africa’s most eloquent feminists. She was a member of the Arts Council of Great Britain, and in 2005 she received the Order of the British Empire award.

Buchi Emecheta suffered a stroke in 2010, causing her health to decline. She died from dementia at her home in London on January 25, 2017. She was survived by her three of her five children, Sylvester Onwordi, Jake Onwordi, and Alice Emecheta.