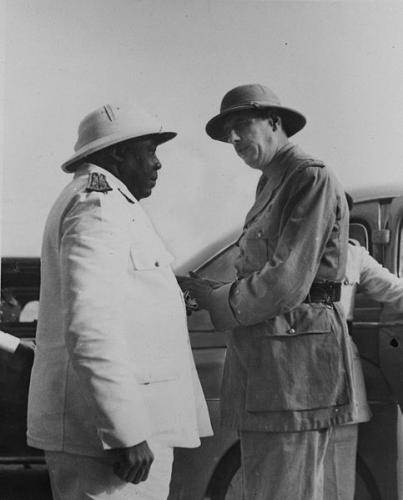 Adolphe-Félix-Sylvestre Eboué, French Colonial Administrator, was the grandson of slaves but was born a free man on December 26, 1884, at Cayenne, French Guiana, a French colony whose residents had full French citizenship.  Félix Eboué was the youngest son of the five children of Yves Eboué, a gold washer, and Aurélie Eboué, a grocer. The young Eboué showed brilliance during his education in Cayenne and won a scholarship in 1901 to study at the Lycée Montaigne in Bordeaux, France. In 1906, he was admitted to the Ecole Coloniale, where administrators for the French Empire were trained.

After completing his studies and a brief period as Colonial Administrator in French Congo, Eboué was posted in Oubangui-Chari (present-day Central African Republic) in 1909 where he spent most of his career until 1931. While maintaining good relations with local African chiefs, Eboué scrupulously applied the French Colonial ideology based on assimilation and forced labor. Eboué, for example, introduced forced labor in cotton production in Oubangui-Chari starting in 1924.

Eboué then spent two years as general secretary in Martinique, French West Indies (1932-1934), and two years in the same post in Mali (then Sudan), French West Africa (1934-1936). From 1936 to 1938 he was the colonial governor of Guadeloupe, French West Indies, the first person of African ancestry to hold the post in the French Colonial Empire. While there, Eboué developed policies to improve the living conditions of the local population which was regularly exploited by the French sugar industry.

The minister of the French Colonies nominated Eboué as Governor of Chad in 1938. Two years later, from Chad, Eboué rallied the Free French Forces (FFL) shortly after the 18th of July, 1940, when General de Gaulle called for resistance to the Vichy regime which was a puppet state of Hitler’s Germany. He led Chad, then all of French Equatorial Africa and finally all French colonies to support de Gaulle and the Free French Forces.  In the process he recruited thousands of African troops to fight with the FFL.

In November 1940, de Gaulle appointed Eboué General Governor of all of French Equatorial Africa.  Eboué settled in Brazzaville where he organized a rear base of the FFL. He also started to write the New Indigenous Policies for the upcoming Conference of Brazzaville in January-February 1944.  That conference had as its objective the shaping of the character of Colonial rule after the war.  It called for moving toward a more British-type ideology of Indirect Rule for the French Empire.

Overtaxed by his intense work, Félix Eboué died from pneumonia on May 17, 1944, in Cairo, Egypt during a three-month break for travel to the Middle East. On May 30, 1949, Eboué’s ashes were introduced in the Pantheon of the French Republic, making him the first black man buried among the illustrious figures of the French Republic.