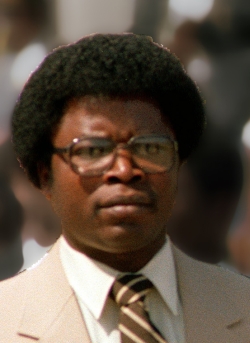 Samuel Kanyon Doe, army officer and Master Sergeant, was the unelected President of Liberia from 1980 to 1990.  Notorious for his human rights violations, Doe seized control of Liberia in April of 1980 through a bloody coup.  A polarizing figure throughout his tenure, Doe was both loved and hated within his own country.  Prolonging his power by brutally stifling all forms of opposition, by 1989 Doe’s actions created a resistance movement that eventually toppled his government.

An ethnic Krahn, Samuel Doe was born on May 6, 1951 in Tuzon, Grand Gedeh County, in southeastern Liberia.  Having come from humble origins, at age eighteen he enlisted in the Liberian army, completing his military training at the Communications School in the Ministry of Defense in Monrovia in 1971.  Exhibiting remarkable leadership capabilities, Doe in 1979 was selected to be trained by United States (US) Special Forces in Liberia, and within a year was promoted to Master Sergeant.

On April 12, 1980, Doe seized control of Liberia along with seventeen other soldiers in a coup d’état.  During the coup Doe’s men executed Liberian president William R. Tolbert, Jr. in the executive mansion along with thirty other guards and personnel.  Upon seizing power Doe immediately promoted himself to commander in chief of the armed forces.  Hoping to strike fear in the heart of potential opponents, shortly after the coup Doe had thirteen of Tolbert’s ministers publicly executed on a Monrovia beach.

Throughout his tenure Doe promoted members of his own Krahn clan, marginalizing all other ethnicities for fear of a possible counter-coup.  Censoring all media that criticized his government, Doe regularly interrogated, imprisoned, and killed journalists who exposed his heavy-handed tactics.  He openly supported U.S. Cold War policies in Africa and cut all diplomatic relations with the Union of Soviet Socialist Republics (USSR), which gained for him an exponential increase in aid from the U.S. under the Ronald Reagan administration.

After rigged elections in 1985 kept Doe in power, an opposition movement began to evolve.  By late 1989 numerous dissident groups sought to oust him from power in a contest that nearly culminated in a civil war.  One of the groups, the National Patriotic Front, was led by Charles Taylor, the future president of Liberia.  As Taylor and his followers were ethnically Gio, a small-scale ethnic war occurred between Doe’s Krahn and Taylor’s Gio civilian supporters in late 1989.  Concomitant with these events, tens of thousands of Krahn and Gio civilians alike fled to neighboring Côte d’Ivoire to escape the violence.

Towards the end of his ten-year reign Doe was unequivocally viewed as a dictator by both Liberians and the international community.  As aid was cut off from the U.S, Doe lacked the resources to continue fighting.  Attempting to flee the country, on September 9, 1990 Doe’s sixty-man troupe was intercepted by a prominent opposition group under the leadership of Yormie Johnson.  The following day on September 10, 1990, Samuel Doe was executed.