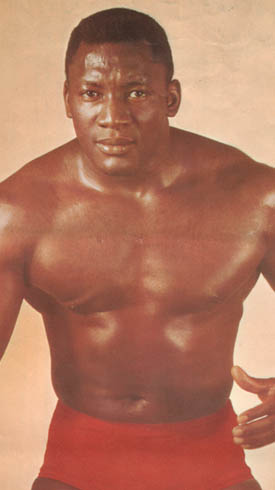 Born in Jamaica in 1935, Dorrel Dixon began weightlifting in his teens which slowly became his introduction into the realm of athletics.  Through weightlifting, Dixon widened his physical stature.  His physique and strength led him to win his first accolade as Mr. Jamaica in 1954.

Later in the year, he competed in weightlifting at the Central American and Caribbean Games held in Mexico City, Mexico.  Dixon became so infatuated with the culture and scenery of the city that when the Jamaican team returned home from the trip, Dixon decide to stay illegally in Mexico.  To avoid getting caught, Dorrel hid with some Mexican colleagues until he obtained a job.  After becoming connected to the son of Rafael Avila Camacho, the Governor of Puebla, Dixon became the bodyguard for the politician, and through this work, he became a citizen of Mexico.

Dixon began wrestling in Mexico in 1955 with the help of wrestling promoter Salvador Lutteroth.  His trainer was Rafael Salamanca, and he his first event was in the Empresa Mexicana de Lucha Libre Area. In 1958, the National Wrestling Alliance gave Lutteroth the booking rights for the World Light Heavyweight Belt.  He chose Dixon who won the match against Al Kashey.  Dixon defended the World Champion belt for a year until being defeated by Ray Mendoza.

Throughout the rest of the 1960s Dixon continued traveling between the United States and Mexico for wrestling matches.  Overall, he wrestled 987 matches against 382 different opponents.  Soon, Dixon’s talent would become worldwide.  His first European match was in Great Britain in 1968.  That same year he also wrestled in Germany for the first time. In 1969 he received the opportunity to travel across the Pacific and wrestle in Australia.  He traveled to Japan in 1974 where he fought 30 matches and lost to only five people.  After returning from Japan, Dixon continued to wrestle in Mexico.  He competed for 11 more years all over Mexico until 1985 when he decided to retire.

Following his wrestling career, Dixon became a wrestling icon like Andre the Giant.  Currently, Dixon still resides in Puebla, Mexico where he is a pastor.