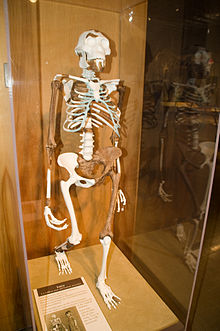 On November 24, 1974, American archeologists Donald Johanson and Tom Gray were searching for fossils in the mountainous, northern Ethiopian Afar region known as the Awash Valley. After a morning searching an area to no avail, they headed back to their vehicle. Rather than walking back the same way, they took a route through a gully they had searched before. Johanson spotted what appeared to be a bone, a forearm. Within a short while they unearthed more bones. They returned to their camp and shared their findings with the other members of their expedition and returned with more team members to continue their search.

That evening, as they celebrated their find at camp, the Beatle’s song “Lucy in the Sky with Diamonds” played repeatedly in the background. That’s how the skeleton these archeologists found received its name: Lucy. The skeletal remains were later renamed Dinknesh, a word in Ethiopia’s official language of Amharic, meaning ‘you are marvelous, unique, one of a kind.’

Johanson, Gray and their team returned to the site each day for the next three weeks, eventually finding and cataloguing several hundred bone fragments, totaling about 40% of a hominid skeleton.

With permission from the Ethiopian government, the bones were taken to the Cleveland Museum of Natural History (CMNH) in Ohio for study. There it became apparent that the size and formation of the bones belonged to a single individual from the species Australopithecus afarensis who lived in East Africa between 2.9 and 3.9 million years ago. This made her skeleton the oldest, intact example ever found from the human branch of hominid species.

Nine years later, after CMNH cast replicas of the bones for further study, Dinknesh was returned to her homeland. In 2007 the remains were brought back to the United States for a five-year long tour and displayed in museums and research centers around the country such as Seattle’s Pacific Science Center. Her final return to Ethiopia on May 1, 2013, was celebrated with great fanfare.

Although older bone fragments have been found in recent years, particularly in South Africa, Dinknesh appears to be the first to exhibit the physiological traits of a human. Her bones now rest in a specially constructed safe in the Paleoanthropology Laboratories of the National Museum of Ethiopia in the country’s capital, Addis Ababa.