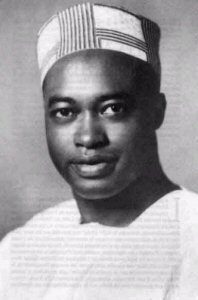 Diallo Telli Boubacar was the first General Secretary of the Organization of the African Unity (OAU), the pan-African body created in 1963 in the aftermath of independence of many African nations and replaced on July 9, 2002 by the African Union (AU). Telli was born in 1925 in Poredaka, Guinea into a Fulani family of the Fouta Djalon region in the French colony of Guinea in West Africa. After his years of school in Conakry, Guinea and Dakar, Senegal, he obtained his Baccalauréat (General Certificate Education), the final degree of secondary education in 1947.

Telli then went to Paris, France, where he studied law at the French National School of overseas territories (Ecole Nationale de la France d’Outre-mer) and earned a doctorate in 1954. After his doctorate, he worked as a magistrate in the French colonies of Senegal and Dahomey (now Benin). In 1955 he was appointed High Commissioner of the United Nations for the French Western Africa (AOF). In 1957, he became the General Secretary of French Western Africa Union in Dakar where he met Sékou Touré, the leader of the French Guinean independence movement. He remained in that position only 18 months.

After the referendum of September 28, 1958 organized by France for its African colonial empire, made Guinea the first Francophone African state to obtain complete independence, Diallo Telli returned to his country to serve it. He was appointed by the new president of Guinea, Sékou Touré, to campaign for the admission of Guinea to the United Nations, a move opposed by France.

After succeeding in getting Guinea admitted, he became ambassador of his country to the United Nations (UN) where he aligned his nation with the Afro-Asian group of countries which remained neutral in the Cold War between the United States and the Soviet Union. When the Organization of the African Unity (OAU) was created in 1963, he became the first General Secretary of that continental body in 1964 and remained in that office until 1972. He was not reelected for another term because President Touré no longer supported him.

After failing to get another term at the OAU or to join the UN again, Telli returned to Guinea, despite the advice of his wife, Kadiatou Diallo Telli, and Senegalese President Leopold Sédar Senghor, to remain abroad as his life might be in danger in his home country. Upon his return to Guinea, Sékou Touré, who now considered Telli as a political rival nonetheless surprisingly appointed him Minister of Justice in 1972. Under the pretext of the “Fulani conspiracy” which Touré used to eliminate many of his political opponents, Diallo Telli was arrested and jailed in 1976, accused of leading a plot by the Fulani against the government of Guinea. In spite of the mediation of many African Presidents, Telli died on March 1, 1977 of hunger and thirst in cell 52 of the notorious “Camp Boiro” prison in Guinea where he and five other “Fulani conspiracy” inmates were held. Telli was 52 at the time of his death.