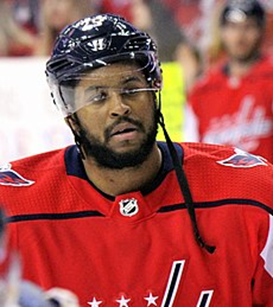 Devante Smith-Pelly, one of only 30 Black players in the National Hockey League (NHL), was born in Scarborough, Ontario, Canada on June 14, 1992. His parents, Wayne Pelly, who oversees a limousine company, and Jacqueline Smith, who works in corporate communications, raised Smith-Pelly and his younger brother in the Toronto suburbs.

Smith-Pelly had been playing hockey since he was a young boy, but lived in a middle-class household, so it was difficult for his parents to afford for him to play the sport. Pelly helped his parents with costs by switching over to basketball when he was 15 years old. While attending Brandon University in Manitoba, he and his team won three consecutive national basketball championships but Smith-Pelly knew hockey was the game he genuinely wanted to play and focused on it later.

Smith-Pelly began his career in the Greater Toronto Hockey League as a scorer. While there during the 2007-2008 season, he made headlines in Toronto by scoring 38 goals in 85 games. A year he played in the Greater Toronto Hockey League, moved up to junior level, and joined the Mississauga St. Michael’s Majors in the Ontario Hockey League during the 2009-2010 season. In three seasons, he scored 25 points in 57 games and ended with 153 points in 184 games. Smith-Pelly joined the National Hockey League in 2010 and was drafted by the Anaheim Ducks in 2010 during the NHL’s second draft. He was 19 years old at the time. Smith-Pelly helped the team of rookies with 7 goals, 49 games, 13 points, and 66 shots. In 2015, he was traded to the Montreal Canadiens after playing for the Ducks for two more seasons.

During the next season (2016), Smith-Pelly was traded to the New Jersey Devils and the following year, 2017, Smith-Pelly joined the Washington Capitals as a right winger. Smith-Pelly helped the team win the Stanley Cup in 2018. In 2019 Smith-Pelly left the National Hockey League to join the Chinese team, Kunlun Red Star, which is in the Kontinental Hockey League.