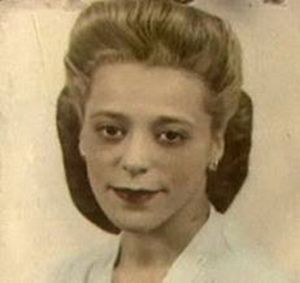 Canadian entrepreneur Viola Desmond was arrested in 1946 for refusing to leave a segregated section of a Nova Scotia movie theatre. She was physically injured by police in the incident but was convicted and fined by local courts. She was posthumously pardoned in 2010.

Born Viola Irene Davis on July 6, 1914 in Halifax, Nova Scotia, she was the daughter of James Davis, a self-employed barber and businessman, and Gwendolyn Irene Johnson, a homemaker. Growing up she wanted to be a hairdresser. When she was refused admittance to Nova Scotia’s hairdressing school because of her race, Desmond was forced to move to  Montreal (Quebec), then New York City, New York, and eventually Atlantic City, New Jersey, to complete her training. She returned to Halifax where she married Jack Desmond and opened her first salon. She later opened a school to train other beauticians.

On November 8, 1946 during a business trip to New Glasgow, Nova Scotia she experienced car trouble. While waiting for her car to be repaired she took in a movie at the local Roseland Theatre, which was segregated with a main floor for white patrons and a balcony for black patrons. Unaware of the segregation policy, Desmond proceeded to the main floor. She was ordered by the manager to go to the balcony.

When Desmond refused, the manager called the police. She was physically ejected from the theatre by the police chief and the manager, causing injury to her hip. The next morning she was brought before the local Magistrate. Canada had no formal segregation laws, but individual provinces such as Nova Scotia enacted them.  It was also common practice for the New Glasgow theatre to assign tickets based on race with an amusement tax determined by seat location. Those purchasing a downstairs ticket paid a tax of three cents while patrons in the balcony paid a tax of two cents. Ironically Desmond was charged with tax evasion for her failure to pay the proper tax for a downstairs ticket. She was, according to prosecutors, one cent short.

Desmond was convicted and fined twenty dollars and court costs. When word of her situation reached Halifax, the local African Canadian community raised funds to hire legal counsel for Desmond to launch an appeal of her verdict. Initially members of the Nova Scotia Association for the Advancement of Colored People (NSAACP) fearing a racist backlash debated whether to assist her. Eventually they did and were defeated when the Nova Scotia Supreme Court dismissed the application for judicial review in 1947.

Desmond and her supporters never again challenged the practice although Nova Scotia dismantled its segregation laws in 1954. Viola Desmond died on February 7, 1965 while on a visit to New York City.  She was 50. Forty-five years later on April 15, 2010, the Honourable Mayann Elizabeth Francis, the Lieutenant Governor for Nova Scotia and the first Afro-Canadian to hold the post, invoked the Royal Prerogative and posthumously pardoned Desmond, declaring her innocent of wrong doing.