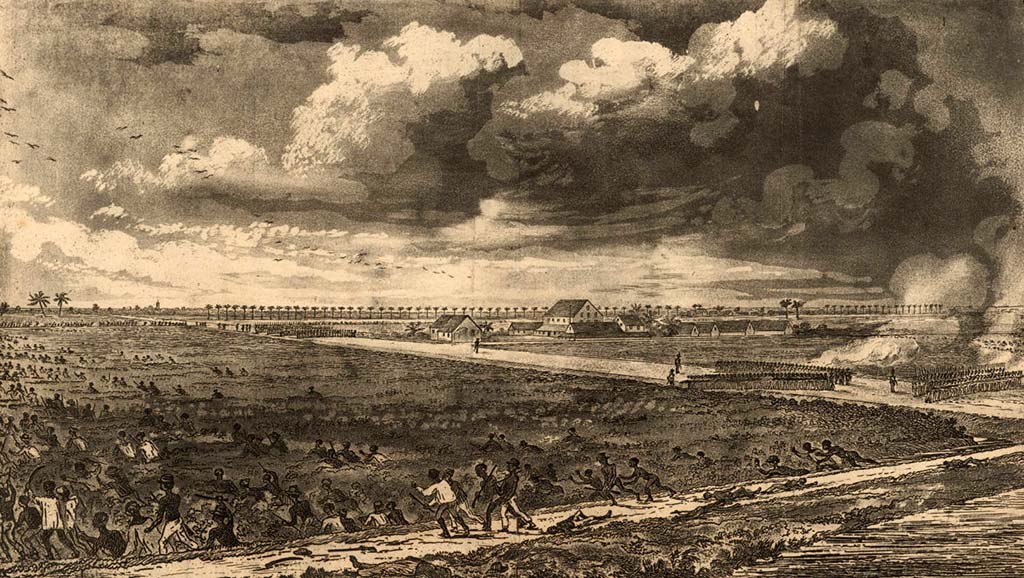 The Demerara Rebellion of 1823 was an uprising involving more than ten thousand enslaved people in the Crown colony of Demerara-Essequibo (now part of Guyana) on the coast of South America. The rebellion took place on August 18, 1823, and lasted two days. No particular incident sparked the rebellion; the enslaved simply grew tired of their servitude and sought to resist in the most direct way they could.

Planning for the rebellion began on August 17, 1823, at Plantation Success, one of the largest estates in the area. Two leaders emerged during the planning period: Jack Gladstone, a cooper on Plantation Success, and his father, Quamina, a senior deacon at a church led by English Protestant missionary, John Smith. Gladstone and others planned the uprising, but Quamina objected to any bloodshed and suggested instead that the enslaved should go on strike. Quamina and other leaders visited John Smith, informing him of his son’s plans.  Smith urged the enslaved to remain peaceful, exercise patience, and wait for new laws that would reduce their suffering. Quamina carried Smith’s message back to the plantations.

Quamina’s call to remain peaceful fell on deaf ears. The enslaved on Plantation Success rebelled the next evening, August 18, 1823, and attempted to seize all firearms on the plantation. They locked up the whites during the night, planning to release them when their demands were met.  They did not see their rebellion as a challenge to slavery itself but demanded better treatment for enslaved people in Demerara-Essequibo.

Most of the enslaved remained loyal to their masters. An enslaved house servant, Joseph Packwood, told his owner, John Simpson, about the planned revolt before it began. Simpson, in turn, informed Governor John Murray, who rode out to confront the rebels with the militia.  The enslaved demanded their rights, but Governor Murray ordered them to return to their plantations. When they refused, he declared martial law. Some returned to the plantations while others participated in the rebellion.

Only a handful of whites were killed during the Demerara Rebellion. The rebels locked up owners, managers, and overseers on thirty-seven plantations, who did not flee to Georgetown, the colonial capital, when the rebellion began. Large numbers of Christian slaves refused to rebel and helped suppress those who rose up.

Although the rebellion ended on Tuesday, August 19, the punishment that came afterward was severe. Hundreds of rebels were hunted down and killed, including two hundred who were beheaded as a warning to other enslaved people. Fourteen rebels were hastily tried and sentenced to be hanged. Governor Murray commuted their sentences and had them deported elsewhere in Caribbean. Jack Gladstone was deported to St. Lucia. His father, Quamina, who had argued against the revolt, was tracked down by dogs and Indians and killed in September 1823.

“Demerara Rebellion of 1823,” National Library of Jamaica, http://nlj.gov.jm/; Joshua Bryant, Account of an insurrection of the negro slaves in the colony of Demerara, which broke out on the 18th of August, 1823. (Georgetown, Demerara: A. Stevenson at the Guiana Chronicle Office, 1824); “Demerara Rebellion of 1823,” The Abolition Project, http://abolition.e2bn.org/resistance_52.html.