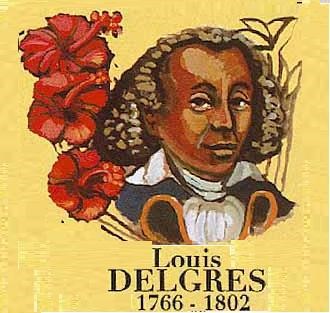 Louis Delgres, born in Martinique on August 2, 1766, was one of the most important figures in the fight against slavery in the French Caribbean colonies. The child of an inter-racial couple—Elisabeth Morin, black, and Louis Delgres, white—he quickly entered the military in 1783 at the age of 17 after a solid education. Influenced by the American Revolution, he later supported the French Revolution and the Republican ideal.  Delgres left Martinique island after its conquest by the Royalists in 1791 and moved to the island of Dominique, where he participated to local Republican elections.

During the last decade of the 18th century, he dedicated his life to the service of the French Republic.  He fully supported the abolition of slavery by the French National Assembly in 1794 and supported the Republic twice, firstly by defending Guadeloupe against a British invasion in 1794, and secondly by participating to the Garifuna riots in Saint-Vincent in 1795 where the black population of this island rose up against British rule. His involvement in these conflicts led to his participation in major battles against England.  He was captured and imprisoned twice in three years between 1794 and 1797.  His reputation in the French army grew and he was promoted to Captain and became a major adviser to French Admiral Jean-Baptiste Raymond de Lacrosse.

In 1801, after the death of the General Antoine de Bethencourt, Admiral Lacrosse appointed himself Governor of Guadeloupe while much of the officer corps wanted mixed-race Magloire Pelage to be the next governor of the island. Lacrosse was removed by the French government and deported on November 1, 1801.  Louis Delgres, who had been loyal to Lacrosse, now joined the rebellion against French rule.

Magloire Pelage, now Governor of Guadeloupe, appointed Delgres as chef of the Arrondissement de Basse Terre, a jurisdictional entity of Guadeloupe. During the months of January and February 1802, immediately following his appointment, Delgres dismissed white French civil servants and officers, accusing them of communicating with Lacrosse or attempting to restore slavery to the island.

On November 9, 1799, Napoleon Bonaparte had become ruler of France. His attempt to reconquer Haiti following its Revolution ensured that he would be unsympathetic to Delgres and others fighting in the name of the Republic.  On May 6, 1802, Napoleonian General Antoine Richepance arrived in Guadeloupe with a French Army to reestablish slavery.  When Governor Magloire Pelage quickly surrendered, Delgres decided to lead a force to fight Napoleon’s troops.  On May 10, 1802, Delgres signed a call to insurrection written by his white secretary, citizen Monnereau, who was executed for this text titled “The Last Cry of Innocence and Despair.”  This revolutionary document called on the people of Guadeloupe to rise up against the invading French forces “who just want Black men (…) in the chains of Slavery.”. This call inspired many local Guadeloupe residents to embrace the motto, “Live free or die”.

Louis Delgres and his followers resisted the much larger French Army for 18 days.  When it became clear that they would be defeated, Delgres ordered a suicide of himself and his men on May 28 by exploding their reserves of munitions.  When they understood that there was no hope left they decided to take their own lives and those of some of the many French soldiers arrayed against them.