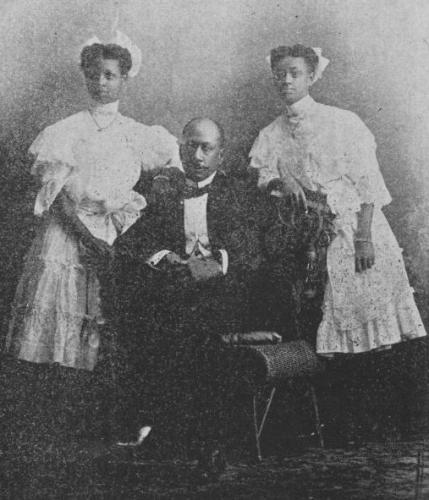 Born in 1856, Martín Morúa Delgado gained prominence as an Afro-Cuban writer and Cuba’s first black Senate president after the country’s war for independence against Spanish rule in the 1890s.  Son of an African-slave mother, Ines Delgado, and Spanish father, Francisco Morúa, Martín Morúa Delgado espoused both anti-slavery sentiments and exemplified ideas of success through meritocracy among Afro-Cubans.

Unable to obtain a formal education because of economic demands, Morúa Delgado was thrust into the work force and became a self-taught Cuban.  He became a prolific reader and was fluent in several languages.  Beginning his literary career in 1878, Morúa Delgado published a newspaper, El Pueblo.  Through it, he opposed slavery and sought the integration of blacks into mainstream Cuban society and culture.

In 1880, Delgado left Cuba for Key West, Florida in the United States where he spent the next ten years working as a literary critic and translator and publishing his magazine Revista Popular.  While in the United States he wrote the essays “Duty Calls” and “Cuba and the Colored Race.”  While the former is a brief account of Cuba’s social history and call for revolution against the Spanish, the latter focuses on the historical plight of Afro-Cubans and their desire for freedom from slavery.

Upon returning to Cuba, Morúa Delgado published two novels, Sofia and The Unzuazu Family.  Again, he explored issues of the cruelty of slavery and its subsequent psychological impact not just on individual Afro-Cubans but also on Cuban society as a whole.   He focused especially on the complex interpersonal relationships among Cubans, which had been often built on a foundation of mixed-race relationships.

Becoming a major political figure in post-independence Cuba, Morúa Delgado was one of two men of color elected to the country’s constitutional assembly under United States occupation.  In 1901 he became the country’s first elected Afro-Cuban senator (1901).

As part of the Afro-Cuban intellectual/political elite, Delgado symbolized a social mobility that very few black Cubans were able to achieve because of social and legal barriers.  Although a believer in racial equality, Morúa Delgado opposed independent, black civil rights organizations.  Instead he worked through his political party, the Liberal Party, in establishing patronage networks among Afro-Cubans.  As the first black President of the Cuban Senate (1909), Morúa Delgado introduced a bill that banned black political parties because they discriminated against white Cubans.  The Morúa Amendment would later be cited as inciting Cuba’s “Race War of 1912.”  Morúa Delgado would go on to become Minister of Agriculture, passing away in 1910 while serving in that office.

Jorge Cantera and Carolina Hospital, A Century of Cuban Writers in Florida: Selected Prose and Poetry (Sarasota: Pineapple Press, Inc., 1996); Aline Helg, “To be Black and to be Cuban: The Dilemma of Afro-Cubans in Post-independence Politics,” in Darien J. Davis, eds., Beyond Slavery: The Multilayered Legacy of Africans in Latin America and the Caribbean (Lanham: Rowman & Littlefield Publishers, Inc., 2007); http://www.historyofcuba.com/history/race/Delgado.htm.