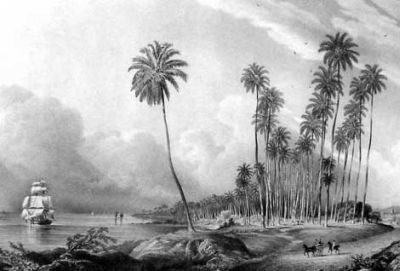 Jamaica in the Era of Cubah Cornwallis
Public domain image

Cubah Cornwallis was a former slave to Captain William Cornwallis and became well known in the Caribbean as an accomplished nurse. Few documents exist about her 18th century life, and her name has various spellings including Coubah, Couba, Cooba and Cuba. References to her indicate that she relied on healing practices associated with Obeah, a term used in the West Indies to describe folk magic, sorcery, and religion based on West African influences.

The details of her release from slavery from Captain Cornwallis, brother of Charles, Earl Cornwallis, are also not known although there are references suggesting that she and Captain Cornwallis were lovers. When freed she was appointed by Cornwallis as his housekeeper during his stay in Jamaica. On his departure, she settled permanently in Port Royal and began her career treating sailors for the many and varied diseases and injuries they sustained. She purchased a small house that she converted into a combination rest home, hotel and hospital.

With its international ports, widespread diseases such as dysentery, yellow fever, malaria and scurvy were commonplace in the West Indies of the 18th century. Death rates among the military, civilian and enslaved populations often reached more than 50%. There were few official hospitals, and methods of curing diseases were often experimental.

Cubah Cornwallis became so well known for her treatment of the sick that in 1780 when Captain Horatio Nelson fell ill with dysentery during an expedition to Nicaragua, he was taken to her by Admiral Sir Peter Parker, the commander-in-chief of the Royal Naval forces in Jamaica. Later she was entrusted with the treatment of Prince William Henry, later William IV, when he was stationed in the West Indies. The Prince was so grateful to Cubah that many years later he told the story to his wife Queen Adelaide, who in turn sent Cubah a gown that she wore only once in 1848 as her funerary gown. Nelson too remarked in his correspondence to friends and family how indebted he was to Cubah Cornwallis. Whenever a friend or colleague was despatched to Jamaica he requested that they pass his good wishes to her.

Although it is not known when she was born, Cubah Cornwallis must have lived a long life. It is documented that she assisted in Nelson’s recovery in 1780 and was, by then, already an established and respected figure on the island. Her date of death, sixty eight years later, is a testament to her longevity.