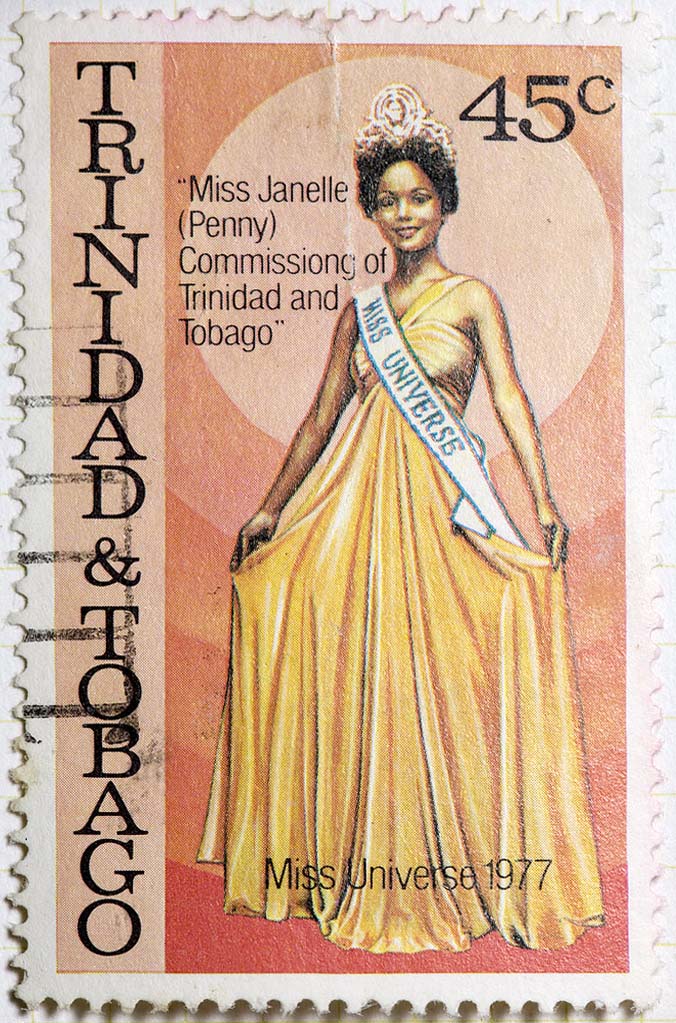 Janelle Penny Commissiong, a native of Trinidad and Tobago, was born in June 1953, migrated to the United States at the age of 13, and returned to Port-of-Spain, Trinidad in 1976. After winning the Miss Trinidad title, she went on to be crowned Miss Universe 1977 in Santo Domingo, Dominican Republic. She was the first woman from the Caribbean and the first woman of African ancestry to be crowned Miss Universe. Commissiong is the daughter of a Venezuelan mother and a Trinidadian father. In 1976, just before winning the Miss Universe crown, she studied fashion at the Fashion Institute of Technology in New York City, New York.

During the Miss Universe pageant, Commissiong was a very popular contestant who won the photogenic competition of the pageant. Nonetheless, she was not considered the favorite to win the pageant. Most observers claimed Miss Austria, Eva Maria Duringer, was the odds on favorite to take the crown. Duringer finished as 1st runner up.

During her reign (1977-1978) Commissiong was a public advocate for black rights in nations where people of African ancestry were minorities, and she campaigned for world peace. In 1977, Commissiong was awarded the Trinity Cross, Trinidad and Tobago’s highest honor. Three postage stamps were also issued in her honor by her country.  In 1978, Commissiong’s successor was Margaret Gardnier, Miss South Africa. For many it was tragically ironic to see the first Miss Universe of African ancestry crowning a woman from a nation that was internationally known for its racial injustice toward black people.

As the first black Miss Universe, Commissiong attracted more than normal international attention. For the U.S. to Asian media especially she was a particularly interesting topic.  She was also in demand around the globe as a speaker.  Much of the interest continued after her reign.  Soon after she relinquished the crown in 1978, Joaquin Balaguer, President of the Dominican Republic, invited her to interview him in the National Palace.  As she did during her tenure as Miss Universe, she continued to visit many African, Asian, and European nations as well as the United States.

After her reign ended Commissiong married Brian Bowen, the founder of Bowen Marine, a Trinidadian pleasure boat manufacturing company.  When her husband died in an accident in 1989 she headed the company for a brief period.  She remarried for a second time to Alwin Chow, another Trinidad businessmen and they adopted a daughter, Sasha.

Like many famous people of Caribbean heritage, Janelle Commissiong is considered an icon in her native Trinidad and Tobago where she continues to manage successful businesses.