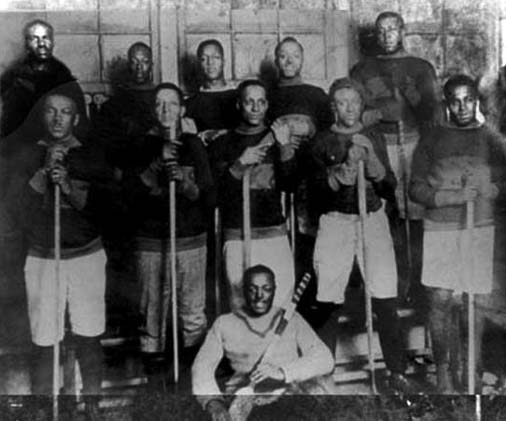 Nova Scotia is considered the place of origin of modern ice hockey. The quantity of natural ponds ideal for skating, combined with the British gaming tradition helped facilitate the geographic and social conditions necessary for the development and creation of the game now known as Canadian hockey.

The roots of Canadian hockey originated with the North American Indians but early African-Canadian players also helped shape the sport. By the mid-1890s, in an era when many believed blacks could not endure the cold, these African-Canadian athletes defied myths and developed a revolutionary style of hockey that was fast moving, tough, acrobatic, exciting, and entertaining.

During the late 1890s games between black club teams in Nova Scotian towns and cities were arranged by formal invitation. By 1900, however, the Coloured Hockey League of the Maritimes was created and was headquartered in Halifax, Nova Scotia.

The Colored Hockey League produced players and athletes comparable to any in Canada. These Black Nova Scotians changed this winter game from the primitive “gentleman’s past-time” of the nineteenth century to the modern fast moving game of today. Led by skilled and educated leadership, the Coloured League emerged as a premier force in Canadian hockey and supplied the resilience necessary to preserve a unique sports culture that still exists. Unfortunately, their contributions were ignored as hockey players copied elements of the black style and often took credit for black hockey innovations.

Some of these innovations important to the modern game of ice hockey included the “slap-shot” and the practice of goalies going down on the ice in order to stop the puck. Despite these and other important contributions to today’s game of hockey, there are no monuments to the Coloured Hockey League of the Maritimes.

Although the League continued to be prominent until the mid-1920s, racism, World War I, and dramatic changes in the Nova Scotian economy all played a part in the League’s demise. Nonetheless the Coloured Hockey League of the Maritimes changed the way hockey was seen and played in early Canada.