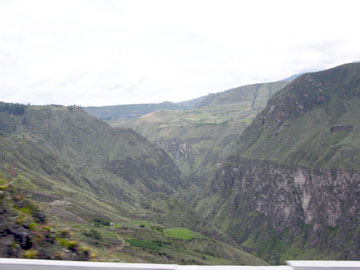 The Chota Valley is located in Ecuador, spanning the provinces of Carchi, Esmeraldas, and Imbabura in the Northwest corner of the country along the border with Colombia. The Valley has ten to fifteen villages with a total population of less than fifteen thousand. Due to the country’s history of slavery, many of the residents who live in villages within the Valley are overwhelmingly of African descent. The Chota River flows through the upper part of the Valley. The most important market in the Valley is located in Ibarra, while the closest large city is Ecuador’s capital, Quito, about 50 miles away.

The history of the Chota Valley and the surrounding area dates back to the 16th century. The first blacks to arrive in Ecuador came between 1533 and 1536, when Jesuit priests imported African slaves to work on their sugar plantations along the coast and central highlands. Because the indigenous labor force was often scarce or rebellious, other planters soon followed in the Jesuits’ footsteps of using African slaves. Africans also arrived in Ecuador by the way of shipwrecks in the late 16th century.

Eventually the Jesuits were seen as a threat to the colonial administration, so they were expelled by the Spanish in 1767. In the 19th century black soldiers were brought from Colombia to Ecuador to be used in the wars of liberation, and many of them stayed in the Esmeraldas after they were freed. The last significant migration of blacks to the area occurred in the late 19th century, when four to five thousand Jamaicans were used to work on construction projects and plantations.

The era of slavery began to come to a close in Ecuador in 1821, when the Spanish crown outlawed international slave trafficking. The crown also ordered that those who were born slaves were to be freed on their eighteenth birthday. Those laws, however, were rarely enforced. Slavery in Ecuador officially came to an end on September 27, 1852 with the ratification of the Fifth Constitution, which allowed landowners to be compensated by the national government for freeing their slaves.

Those of African ancestry in the Chota Valley still keep the culture and traditions that had been passed down through generations. One of the traditions was the music and dance of bomba, performed during celebrations. Those in the Valley also continue to eat cultural dishes that contain beans, chicken, fish, rice, and morocho dulce, the foods of their formerly enslaved ancestors.

The land in the region is held by a few large landowners but, economically speaking, it is almost worthless without irrigation. To get by, most of the people who live in the Valley practice subsistence farming, and they raise goats and pigs, as well.