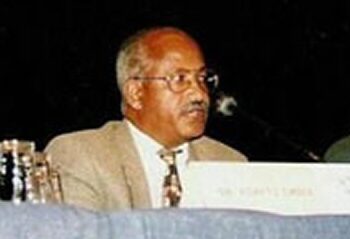 Eshetu Chole was Ethiopia’s leading economist prior to his death in 1998. His research and publications encompassed an extraordinary breadth: agriculture, industrial and social development, fiscal policy, macro- and microeconomics, and human development at national and regional levels. He was also a budding poet.

Chole was born in Negele Borena in southern Ethiopia where he obtained his elementary education. He completed his education at the General Wingate Secondary School in Addis Ababa. He then attended University College Addis Ababa (later Haile Sellassie I University and now Addis Ababa University) where he earned his first degree in economics in 1966 and simultaneously won the Chancellor’s Gold Medal of the Arts Faculty.

After his employment as a graduate assistant in the Economics Department at University College, Chole obtained his M.A. from the University of Illinois-Urbana Champaign in 1968, and his Ph.D. from the University of Syracuse (New York) in 1973. Dr. Eshetu Chole returned to teach economics at Addis Ababa University where he would remain for the rest of his career, with the exception of a year of teaching at Princeton University (New Jersey) in 1995-1996.  Chole wrote a number of books including two that were published posthumously, Democratisation Processes in Africa: Problems and Prospects (2000) and Underdevelopment in Ethiopia (2004).

In addition to being an economist, Chole also emerged as a prominent figure in the international campaign for social justice and democracy in Ethiopia.  Committed to fighting poverty and accelerating socioeconomic development in Ethiopia, Eshetu Chole, before his death in 1998, was responsible for educating a new generation of Ethiopian economists and intellectuals.