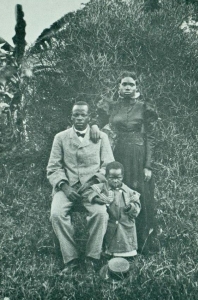 John Chilembwe was a Baptist educator and political leader who organized an uprising against British colonial rule in Nyasaland (today Malawi). Though details about Chilembwe’s early life are largely undocumented, it is believed that he was born in the Chiradzulu region of Nyasaland sometime around 1871 to a Yao father and a Mang’anja slave. The Mang’anja were the traditional ethnic group of the area but fell victim to enslavement by Arab and Yao slave traders; the Yao, originally from northern Mozambique, fled famine in their native country and served as middlemen for the Arab slave-raiders. Chilembwe, a mix of the two ethnic groups, embodied the plight of both. He grew up under the prevailing atmosphere of insecurity of the southern Nyasa regions. When the British colonized the area in 1891, naming it Nyasaland, they established newly organized governance and missions, and sought to control the indigenous people of the region.

In the autumn of 1892 Chilembwe met the Baptist missionary Joseph Booth, who had recently established the Zembesi Industrial Mission as an alternative to the older Scottish Presbyterian missions that exploited the indigenous population. Though Chilembwe initially applied to be Booth’s cook, he quickly became a close friend and ally of Booth and took care of Booth’s daughter. The missionary educated Chilembwe on his egalitarian philosophy and baptized him on July 17, 1893.

The pair traveled to the United States in 1897 to fundraise for the Mission. There, Chilembwe was plunged into a milieu that was highly critical of whites. He met and was influenced by the radical Zulu missionary John L. Dube from South Africa, Dr. Lewis Garnett Jordan of the Negro National Baptist Convention and many other African American preachers and radicals. Staying behind in the United States as Booth returned to Nyasaland, Chilembwe attended Virginia Theological Seminary and College at Lynchburg, Virginia in 1898 and 1899. In the United States, Chilembwe gained an increasingly global perspective on the struggle of people of African descent against injustice and white supremacy. He took these newly acquired political ideas back to Nyasaland in 1900, returning as an ordained Baptist minister.

Once returned, Chilembwe founded the Providence Industrial Mission with aid from the American National Baptist Convention. By 1912, he had established a chain of independent African schools, constructed a brick church and planted crops of cotton, tea, and coffee. His attempts to uplift the local population, however, were undercut by continuing exploitation of Africans by the British. Triggered by British mistreatment of famine refugees from Mozambique as well as the conscription of natives to fight the Germans in Tanzania during World War I, Chilembwe invoked the name of the American abolitionist John Brown and organized a rebellion against the British.

He and 200 followers staged an uprising on January 23, 1915 with the aim to kill all male Europeans. The revolutionaries killed three British subjects, including a particularly corrupt plantation owner named William J. Livingston, who they beheaded in front of his wife and daughter. When the uprising failed to gain local support, Chilembwe fled to Mozambique, where he was killed by African soldiers on February 3, 1915. Though his rebellion was ultimately unsuccessful, Malawi, which gained independence in 1964, celebrates John Chilembwe Day on January 15th as his uprising is viewed as the beginning of the Malawi independence struggle.

Thomas Price, Independent African: John Chilembwe and the Origins,
Setting and Significance of the Nyasaland Native Uprising of 1915