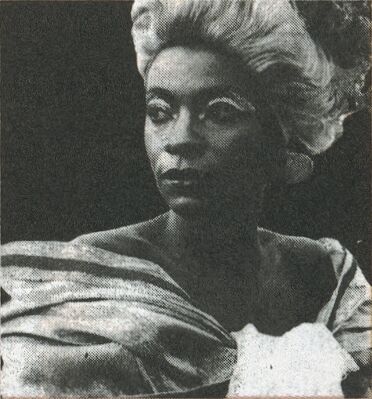 Francisca da Silva de Oliveira, better known as Chica da Silva (or spelled Xica da Silva), was a Brazilian woman born into slavery, who went on to gain her freedom and become a powerful and well-known member of Brazilian society.

Silva was born between the years 1731 and 1735 (exact year is unknown) to a slave mother, Maria da Costa, and a white man, Antonio Caetano. Her mother was a slave in Domingues da Costa, but Silva was born in the village of Milho Verde. Silva’s baptism was celebrated around 1734 by Reverend Mateus de Sa Cavalcanti.

Living in Tejuco before 1749, Silva was enslaved to Portuguese physician, Manuel Pires Sardinha. Silva served as a domestic slave to Sardinha and bore two children to her owner as a result of her enslavement.

From her relationship with Oliveira, Silva assumed the nickname “Girl in charge.” This was due to her newly-gained immense wealth that came with being in a relationship with a diamond contractor. She soon moved into a castle-like house that had many luxuries, including a private chapel, and it was the only house in the area with a fully-equipped theater.

Silva and Oliveira had thirteen children together. In 1770 Oliveira was required to return to Portugal. He decided to take his sons with him, and Silva stayed in Tejuco to raise their daughters, where she dedicated most of her time to their education. Her children went on to enjoy successes in their lives, including a nomination as the chief judge’s immediate heir and a rank of colonel in the cavalry of Minas Gerais. Silva was able to retain her status after her white partner left, despite her being a person of color.

Silva’s life has been highly romanticized in popular culture. Her life became the subject of a movie, telenovela, and songs. The telenovela, originally shown in Brazil, has been successful in many countries throughout the world. The person who depicts her in the telenovela, Tais Araujo, is the first and only black Brazilian to star as the protagonist of a telenovela.

Silva passed away in 1796. She was granted the privilege only known to wealthy whites of being buried at the Church of Sao Francisco de Assis. Records indicate her name was associated with the status of freedwoman.